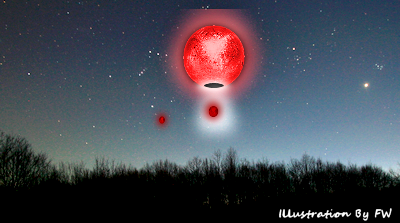 Minnesota witnesses at Prior Lake reported watching a red-orange glowing ball about six feet in diameter hovering over a marsh area that rose up, emitted two smaller spheres and moved away, according to testimony in Case 73536 from the Mutual UFO Network (MUFON) witness reporting database.

At approximately 7:30 p.m.on October 28, 2015, the two witnesses were sitting in the sun room of a house in Prior Lake watching TV when a bright circular object above the tall grass in a swampy area about 400 feet away attracted the second witnesses’ attention.

“She called it to my attention,” the reporting witness stated.“This object, about five or six feet in diameter, was rising up and moving to the left at an angle. As it rose it emitted two similar, but smaller objects, each perhaps a foot and-a-half in diameter, which moved to each side of the first object, and the three flew off together in formation in a northeast direction until they were out of sight. The objects were all a red-orange color and not quite as bright as the full harvest moon.” […]