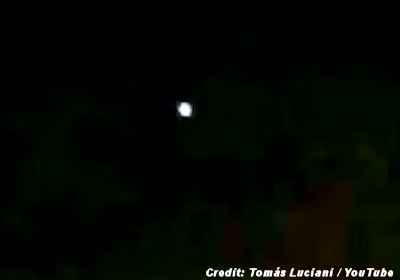 The video shows the flying object over the city of Yerba Buena (Tucumán Province). After a series of movements, it rises swiftly and disappears.

A video published on YouTube displays an alleged UFO in flight in the skies over the Province of Tucumán, more specifically the city of Yerba Buena. “A mighty UFO filmed over Yerba Buena this Monday at 21:15 hours,” said the reader who submitted the clip to Diario Contexto (newspaper) via WhatsApp.

“I recorded it from the 300 block of Aconquija Avenue. Another UFO passed by shortly, distancing itself quickly. The distance kept me from recording it,” he added.