Reptilian – serpent – snake iconography is found throughout the planet in art work and petroglyphs, referring to the spiral of consciousness creation and human DNA. It is laced with metaphors about human origins and destiny. 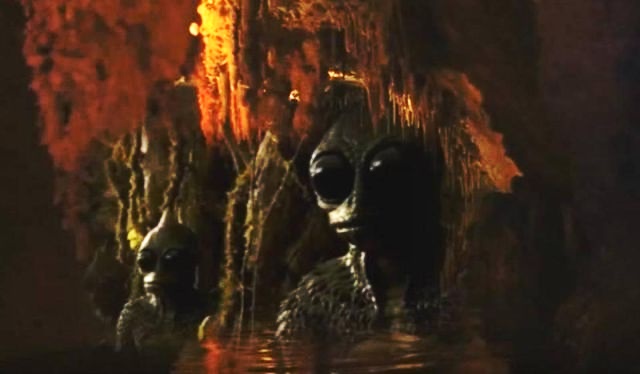 In Australia the aborigines speak of a reptilian race which lives underneath the surface in caverns. It is said that the ancient cavernous underground chambers under the Black Mountain is such a place.

Yet the already-existing ancient cavern system under Dulce base.

The Draco (reptilian humanoids) used these caverns and tunnels for centuries. Later, through RAND Corporation plans, it was enlarged repeatedly. The original caverns included ice caves and sulfur springs that the ’aliens’ found perfect for their needs.

Besides, Dulce base seems to be a major ’through’ point for exterran and subterran reptilian activity, a central ’infiltration’ zone for surface operatives, as well as an operational base for abduction-implantation-mutilation agendas and also a major convergence for sub-shuttle terminals, UFO ports, and so on.

The origin of these reptilian humanoids:

These Reptilian humanoids are the creation of the Carians, (Bird Headed Beings) their parent race. They evolved on a planet in the Alpha Draconi star system of the Orion Constellation.

The royal line of reptilians are the Draconians and they have a highly sophisticated knowledge of universal law and are allegedly responsible for the ‘Mystery School Teachings on Earth’.

Now, these reptilians allegedly were given a creational agenda by the Carians. They were to move through the universe and destroy any existing civilization they found along the way, recreating new DNA codes and entities following those codes.

It was part of a Master Plan, a Universal Game, Polarity Integration, reality in conflict, an experiment in emotions, resulting in soul evolution at the end of the cycles of its existence.

Since ancient civilizations have described reptilian beings, it is almost certain that some of these ancient cultures have been in contact with these beings, otherwise how is it possible that these ancient people, like the ancient Sumer civilization, were able to make such detailed figurines and statues of these creatures.

In the video below we explore the Ancient Sumer civilization and their artifacts depicting reptilians and reptilian humanoids.

Finally, myth or not, we should not forget that the NWO elite corporate with a group of reptilian humanoids in order to establish a global control system and they are the force behind a worldwide conspiracy directed at manipulation and control of humanity through deception, espionage and mind control.