Caltech’s Konstantin Batygin, an assistant professor of planetary science, and Mike Brown, the Richard and Barbara Rosenberg Professor of Planetary Astronomy, have found evidence of a giant planet tracing a bizarre, highly elongated orbit in the outer solar system beyond Pluto. 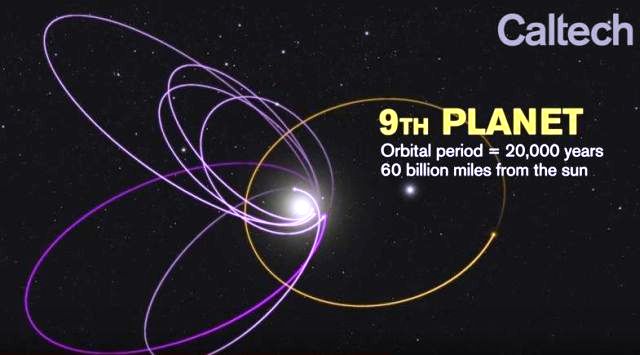 The object, which the researchers have nicknamed Planet Nine, has a mass about 10 times that of Earth and orbits about 20 times farther from the sun on average than does Neptune (which orbits the sun at an average distance of 2.8 billion miles). In fact, it would take this new planet between 10,000 and 20,000 years to make just one full orbit around the sun.

The researchers discovered the planet’s existence through mathematical modeling and computer simulations but have not yet observed the object directly however they noted that the putative planet Nine—at 5,000 times the mass of Pluto—is sufficiently large that there should be no debate of the existence of this planet.

Even NASA’s Director of Planetary Science, Jim Green, made a statement of the discovery of this planet Nine saying ‘there is a so-called planet X out there’ (second video).

For many years conspiracy theorists have been saying that there is another unknown planet, what they call PlanetX or Nibiru, on a long and elliptical orbit.

The Calltech researchers call it Planet Nine or ‘Ninth Planet’ but if we follow Zecharia Sitchin’s claim, it is the tenth planet and according to his theories of Sumerian cosmology, Nibiru or planet X was the twelfth member in the solar system family of planets (which includes 10 planets, the Sun, and the Moon).

Regardless of your view, here’s the order of the planets, starting nearest the sun and working outward through the solar system:

Despite led scientists reclassified Pluto as a dwarf planet we cannot deny that this newly discovered planet supports Zecharia Sitchin’s theory of the existence of a tenth planet (twelve which includes the sun and moon) aka Nibiru/PlanetX.