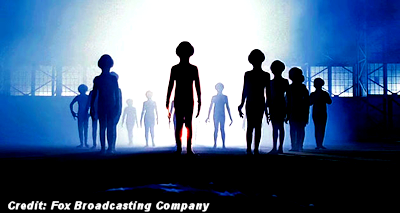 A mysterious man told Chris Carter that his
conspiracy-themed TV classic was too close to the truth.

But how close to fiction was it?

Creator, writer and director Chris Carter tells a real-life tale about the show in its early days that’s worthy of the show’s catchphrase, “The truth is out there.”

“I had someone come up to me during the original run of the series, who said they worked in some high place in a secret government agency, [and] said that we were very close to the truth,” Carter told The Huffington Post.

“I didn’t know whether to take that person at their word or not. I can tell you this: When I wrote the [1993] pilot, I called the FBI to do some research, and they were nice enough, but didn’t really give me the time of day.

“Then, all of a sudden, as we got close to airing, the FBI called and said, ‘Who are you and what are you doing?’ And for a second, I thought it was going to be the long arm of the law coming in to shut me down.” […]

New ‘X-Files’ Trailer: UFO Crash To The Smoking Man and Then Some …