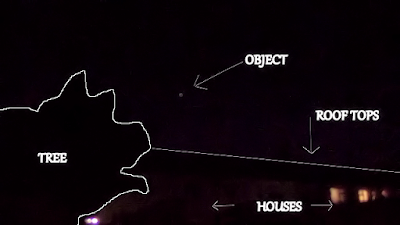 It was roughly 5.20pm Friday afternoon [1-15-16] when I received a phone call from my friend Lee Morgans, so I rolled a cigarette and made my way out into my back garden with the dog as I normally do.

As I remember it, I stopped Lee half way through conversation and said there’s one mate high in the sky! A UFO I said! I do believe the reply was something like, really another one? (Not being the first time seeing a UFO). So I am describing where in the sky the object is located by describing the stars to Lee because Orion’s belt & the moon was to my right from where I was standing at the time, as the object passes the moon, Lee said to me, “I can see it too mate!”

I said “what? “You can see that from where you are” and his reply was “yes!”

He is out walking his dog at this time, later checking on google earth the distance is 5 miles between us so I am impressed with this fact! As the object is silently gliding toward my house (still quite high Estimated 1000FT) I keep saying, “please flash and are you seeing this?”

Not knowing if its flashing at us or me or just flashing randomly, I’m thinking to myself and speaking out loud, “there is no pattern to the flashing so it must be flashing to us mate.” So about a minute or two into watching this metallic round object flashing randomly or at us and gliding silently towards my house getting closer & closer at an estimated speed of about ten MPH Lee is saying the same thing. “Flash!”

When the object is more or less over my house Lee said, “I have to go help my girlfriend with the shopping,” so we ended the call. I can imagine the confused look on her face when turning up to see Lee staring into the sky, ha-ha. I then thought I should be getting this on camera so I ran into my house trying to get past the dog because she thinks I’m out there to play, running towards her while still looking into the sky myself and it looks like its fazing in and out now. Heart racing, I come back out with my Canon Legria HFR606 HD camcorder, so while looking in the sky again where I thought the solid object should be but it seems to have disappeared. How bazaar, considering it seemed solid just now (repeating to myself “please flash”) but couldn’t see anything. So I continue to record anyway and end up swearing on camera out of disappointment of missing the whole encounter!

While moving the camera all around the area looking for the object I pull the camera down slowly and suddenly the object reappears in and out! With my eyes it looked like it flashed at me again like before but not as bright as when it was higher in the sky, so while looking at the footage after I not only realize it’s not flashing like the last time we saw it flash, but fazing in and out! Wow I’m so glad I didn’t stop recording now because I caught the last fazing in and out on film!