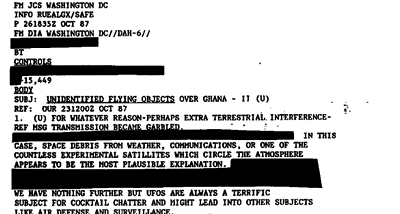 Government documents related to UFOs seem to have a habit of disappearing. This time the files belonged to the Defense Intelligence Agency (DIA).

In 1996, in a response to a FOIA request, [John] Greenewald received nearly 250 files from the Defense Intelligence Agency regarding UFOs. Supposedly, everything they had on the topic. However, several of the files were heavily redacted, meaning that there were portions that were blacked out, presumably, because those portions regard information that is still considered classified.

In 2014, Greenewald requested an MDR for the DIA documents he had obtained in 1996. In his request, Greenewald included links to download the files he had received from the DIA which he now wanted reviewed.

The DIA wrote, “it appears the FOIA case files have been purged from the FOIA database.” […]

UFO Files I Have Loved and Lost