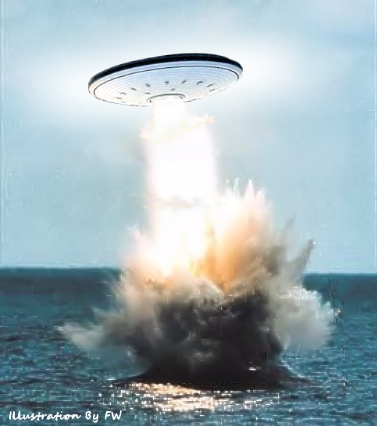 When I was 13, my mother and I saw a tear-dropped shape UFO, flying over Newport Rhode Island after dark. It went at a moderatly fast rate of speed high accross part of the sky and then just shot staight up at an incredible rate of speed and dissappeared.

My Father was a Naval officer, and my mother called the sighting into the Newport Naval Base.–Then about a year or two later, after we were transferred to San Francisco, My father was given the position of Naval Representative to the Joint Chiefs of Staff also working somewhat with the CIA.

One day he called me upstairs and because of my interest from a couple of years before, showed me a telegram that went through the Joint Chiefs of Staff and CIA, describing a sighting of a UFO entering the ocean a a certain latidude and longitude. He told me that they received these telegrams two or three times a week, always in the same location of the ocean. He said the telegram was classified and for me to tell no one else. My father passed away in 2000, and my mother gave me permission to share this. I found out last year that my brother was also shown the telegram.

10 Tips When Investigating a Flying Saucer