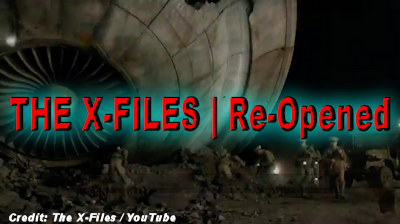 The only way the buildup to Sunday night’s revival of “The X-Files” could’ve been better last week is if Klatuu had tossed UFO beer cans across the White House lawn. First, the “alien megastructure” debate over KIC 8462852 was reenergized when analysts eliminated comet swarms as a cause of the dimming phenomenon surrounding a star located 1,480 light years from Earth. Maybe, as hypothesized in October, ET engineers really are building massive off-world platforms after all.

Then came the Caltech researchers announcing the inferential existence, based on the orbital patterns of Kuiper Belt debris, of a Neptune-sized “Planet Nine.” Although this thing is projected to have a mass 10 times greater than Earth, the real spine-tingler was its predicted 15,000 year solar orbit. That could mean Planet Nine is actually Nibiru, of alleged Sumerian lore, home to the antediluvian Anunnaki gold-hunters who came to Earth and created homo sapien hybrids for slave laborers to work the gold mines.

Finally, last Friday just after 5 p.m., probably after the supervisors had knocked off for the weekend, somebody at the CIA tweeted “Take a Peek Into Our #XFiles” and posted links to Agency documents that have been in public circulation since Jimmy Carter was president. Nothing new here for the hardcores, but hey, get a load of that report dated 8/1/52: “It is recommended that CIA surveillance of subject matter [UFOs], in coordination with proper authorities of primary operational concern at ATIC, be continued. It is strongly urged, however, that no indication of CIA interest or concern reach the press or public, in view of their probably alarmist tendencies to accept such interest as ‘confirmatory’ of the soundness of ‘unpublished facts’ in the hands of the U.S. Government.”

Say what? The CIA wanted to protect us from our alarmist tendencies? Why would they say that? What would we have to be alarmed about? Unpublished facts? Which unpublished facts? Proper authorities? By whose definition is authority proper?

Anyhow, yeah, I was rooting for the reprise of Mulder and Scully to be as exciting as the return of the Nibiru slavers. Maybe it was nostalgia for the infancy of the World Wide Web, when consumers were still hostage to limited options like brick-and-mortar, and Art Bell’s paranoia ruled midnight radio. As cultural buzzwords, “The X-Files” and Roswell evolved simultaneously, and who could say for sure just how much the former factored into the USAF’s PR problem with the latter, when the brass looked desperately moronic in blaming the 1947 incident on military crash-test dummy experiments in 1952. Such halcyon days, the Nineties:

Uncounted Arizona residents from Prescott to Phoenix wandering outside to catch a glimpse of comet Hale-Bopp only to be confronted instead by a humongous flying boomerang. A California suicide cult attempting to climb aboard via applesauce and strychnine. Paranoia everywhere, Oklahoma City, Waco, Ruby Ridge, so unlike today. Everybody got caught up in “The Truth Is Out There” craze – even at a White House birthday party for John Podesta.

But you can’t go back. Even with music by Mark Snow. And even with script writers possessing a daunting command of their material. And even with clever contemporary hooks like the Jimmy Kimmel-Barak Obama 2015 chat about space aliens, and more generic swipes at cable-channel demagoguery (“What Bill O’Reilly knows about the truth could fill an eyedrop”). “Life,” as Mulder 2016 moped, “has become a punchline.”

De Void knows a few things about punchlines, and expects no satisfactory answers from The Great Taboo — not in fiction and certainly not from this fool’s errand of a blog. But Sunday night’s latest convoluted tangle of “X-Files” conspiracies reminded me why I’d drifted away from the show a couple of seasons of seasons before its 2002 wrap. After a nine-year run and two movies, it became pretty clear the writers lacked an end game, then as now. They boxed themselves onto such an incoherent ledge, De Void didn’t care much anymore. And unlike 20 years ago, today I can get all this stuff – “false flag” operations, hybrid aliens, “a venal conspiracy of men against humanity,” as Mulder put it – from the Internet.

When you dump all this junk into the same laundry basket, as last night’s “My Struggle” episode did, it goes down like fast food. To wit: Mulder spends a decade chasing space aliens and it takes less than an hour to persuade him to rewrite his whole world view? Also: Somebody please tell me “the truth is out there” and “I want to believe” really didn’t make their way into the dialogue. Somebody tell me the evil talk-show guy didn’t actually say there’s a plot to quote “take over America.” But maybe that’s already happened. One of “The X-Files” biggest sponsors last night was Scientology. Maybe the teachings of Xenu filtered into the narrative. How would we know, one way or the other?

That said, De Void will probably tune in again, hoping for a glimpse of the A-game, Michael Jordan’s post-up jumper with the Washington Wizards. No point in trying to figure out what the writers haven’t, either. Twenty years of eroding standards on every front and all I need anymore is that occasional moment hanging in empty space like a little diamond. (That image isn’t original — I lifted it from Sartre.)

‘X-Files’ Creator: ‘I Thought The FBI Was Going To Shut Me Down’