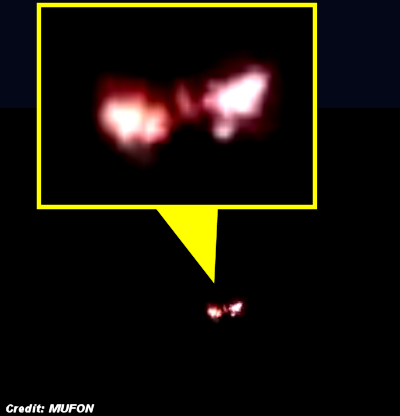 An Oregon witness at LaGrange reported watching and videotaping a glowing, disc-shaped UFO, according to testimony in Case 53207 from the Mutual UFO Network (MUFON) witness reporting database.

The reporting witness and his wife were outside on a balcony having a barbecue when the object was first seen about 10:05 p.m. on August 15, 2013.

“I knew immediately it wasn’t something normal,” the witness stated.“I was taking the video when It either blasted off so fast we could not see or literally just disappeared.”

The case was originally reported to MUFON January 3, 2014, and investigated by Oregon Assistant State Director Keith Rowell and closed as an Unknown.

“According to the check-off data in the witness report, the object they saw maneuvered around a bit in the sky and was a reddish/whitish craft-like object that flashed randomly and seemed to be glowing,” Rowell stated in his report.“They believed the object was disk-shaped and had windows and a dome. This was not reflected in the video (this is almost never the case), but the video does most definitely reveal a strangely and fast-changing, lighted image.” […]

UFO May Have Landed