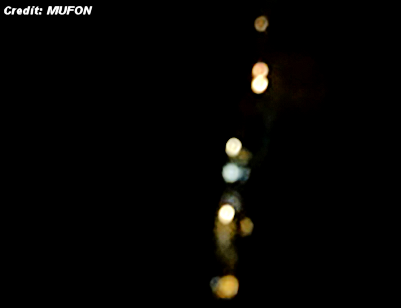 An Oregon witness at Eugene watched and photographed a series of lights “in perfect alignment” that appeared to move to ground level and land about 11:40 p.m. on January 17, 2016, according to testimony in Case 73955 from the Mutual UFO Network (MUFON) witness reporting database.

The witness was outside on a deck when the lights were first seen looking like radiating stars in perfect alignment and spaced like they were on a kite string.

“I took pictures for 20 minutes and then my phone died,” the witness stated.“I was shocked to see this and got my sister to look at them as I had never seen anything like this.”

The witness first thought the lights were airplanes arriving at the airport.

“But they never moved and then they glided down in synch following the arc pattern in the sky. They were white with various levels of brightness. One in the middle seemed to be further away and then moved into alignment and was the same brightness. The lowest one had a blue tinge in the center and was shaped like an orb. The top one was the same size and density as the bottom one.”

The lights were stationary and in perfect alignment staying in place for 45 – 60 minutes and then they suddenly moved down to the horizon in synch. […]