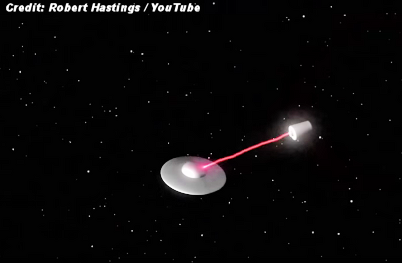 I have recently begun to receive a steady stream of inquiries regarding my documentary film, UFOs and Nukes: The Secret Link Revealed, which was first publicized on the Coast to Coast AM radio show, over a year ago, and more recently at my website. The latter update noted that the film had finally been finished last summer and that efforts were/are currently underway to have it licensed-for-broadcast by one or more television networks. A five-minute trailer is available online.

According to then-Major (later Dr.) Mansmann, two CIA officers confiscated a 16mm version of the film, following a screening of it in his office, attended by Lieutenant (later Dr.) Jacobs and a few other individuals. By that time, the original, 35mm film had already been flown “back East” on a special military flight, probably to be delivered to the CIA’s National Photographic Interpretation Center, the unit that famously discovered Soviet nuclear missiles in Cuba in 1962, resulting in the near-disastrous Cuban Missile Crisis.

Interestingly, a couple of UFO “skeptics”, James Oberg and Kendrick Frazier—long affiliated with the UFO-debunking group CSICOP, now CSI—have diligently attempted to discredit the Big Sur case, claiming that it never happened as Jacobs and Mansmann describe. While portraying themselves as “scientific” investigators of UFOs, attempting to find logical explanations for alleged paranormal phenomena, both men have rather interesting backgrounds which have received very little publicity over the years.

From 1970-72, Oberg was an Air Force officer whose assignments with the Battle Environments Branch at the weapons lab involved the development and utilization of computer codes related to the modeling of laser and nuclear weapons. Oberg also served as a “Security Officer” while at the weapons lab and was, therefore, responsible for monitoring the security procedures used to safeguard the classified documents generated by his group.

After Bob Jacobs went public with the UFO shoot-down story, Oberg wrote to him, chastising Jacobs for revealing “top secret” information. In a 1989 MUFON UFO Journal article, Jacobs wrote that after he broke his silence, “…James Oberg, a frequent ‘mouthpiece’ for certain NASA projects and self-styled UFO Debunker wrote to disparage my story and to ask provocatively, ‘Since you obviously feel free to discuss top secret UFO data, what would you be willing to say about other top secret aspects of the Atlas warhead which you alluded to briefly…?’

It is almost certain that Oberg would not have criticized Jacobs for exposing “top secret UFO data” had he known that Jacobs would subsequently publish his remark. So, here we have one of CSICOP’s leading UFO debunkers—whose public stance is that UFOs don’t even exist—angrily asking Jacobs in a private letter whether he would also openly discuss “other” top secret aspects of the missile test.

For his part, Kendrick C. Frazier is the executive editor of Skeptical Inquirer, the official CSICOP/CSI publication. Many years ago, I discovered that Frazier was in fact employed, beginning in the early 1980s, as a Public Relations Specialist at Sandia National Laboratories, in Albuquerque, New Mexico. Yes, the same Sandia Labs that has been instrumental to the success of America’s nuclear weapons program since the late 1940s, through its “ordinance engineering” of components for bomb and missile warhead systems.

In my opinion, Frazier’s affiliation with Sandia Labs—he retired after working there for over two decades—is highly significant, given the hundreds of references in declassified government documents, and in the many statements by former military personnel, which address ongoing UFO activity at nuclear weapons sites over the past seven decades.

Considering these disclosures—which clearly establish a link between UFOs and nukes—I find it interesting, to say the least, that the longtime editor of the leading debunking magazine—whose pages routinely feature articles discrediting UFOs and those who report them—worked for over 20 years as a public relations spokesman for one of the leading nuclear weapons labs in the United States. Interestingly, Frazier failed to mention this job in his otherwise comprehensive online bio and it was left to me to publicize the facts in my 2008 book UFOs and Nukes.

Consequently, here is the situation: In what is arguably the most dramatic nuclear weapons-related UFO incident ever revealed, two former U.S. Air Force officers insist that one of our experimental nuclear warheads was actually shot down by a flying saucer. And who is responsible for publishing debunking articles about the Big Sur incident, in which it is claimed that the UFO encounter never happened? Why, a PR guy working for the U.S. government’s nuclear weapons program!

So folks, when a UFO skeptic tells you that the Big Sur UFO Incident never happened, please direct him/her to the publicly-available commentary offered by the two witnesses—Bob Jacobs and Florenze Mansmann—who have described the amazing images on the film that was confiscated by the CIA.

Finally, the 1964 event described by Jacobs and Mansmann was not unique. In the article below, a U.S. Army spokesman officially announced to the media the existence of a very similar incident—involving a UFO flying near a dummy nuclear warhead in space—which occurred some nine years after Big Sur.