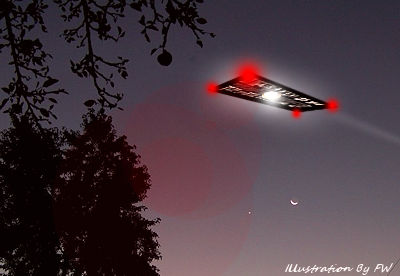 “I pulled over since I noticed that the object was not moving,” the witness stated.“I noticed the object since it had four red lights on each corner and a blinking white light in the center.”

The witness first assumed the object was simply a plane at a distance, but moving closer realized it was something else.

“My second thought was that it was some sort of drone, which was not the case either since the object was rather large, about the size of a car. The next thing I noticed is that the object was sort of a transparent color, so with the dark color of the sky at 5 a.m., it appeared black.”

The object remained hovering during the entire observation. […]