Hillary Clinton’s presidential campaign manager, John Podesta, is an advocate for the release of government files regarding UFOs. Over the past few months he has tweeted about his interests. However, many suspected his comments were made in jest. Podesta was recently asked about his UFO interests on KLAS 8 News Now and whether he has discussed the topic with Clinton, and says he is still very interests in the declassification of UFO documents. 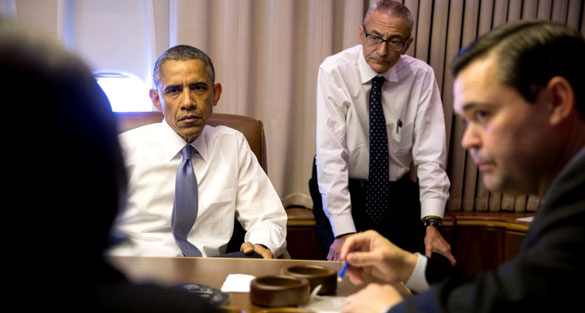 Podesta was interview by KLAS political reporter Steve Sebelius, and the interview was featured in a story on the KLAS website co-written by KLAS reporter George Knapp.

In the story, KLAS wrote: “Several U.S. presidents are on the record, talking about the UFO mystery. Former Presidents Jimmy Carter and Ronald Reagan say they had UFO sightings of their own, but the current presidential campaign might be the first in which UFO disclosure has been championed by a major party candidate.”

When asked about his interests in UFOs and whether he has discussed the issue with Clinton, Podesta answered, “I’ve talked to Hillary about that. It’s a little bit of a cause of mine, which is, people really want to know what the government knows, and there are still classified files that could be declassified.”

In an interview with The Conway Daily Sun in December, 2015, she was asked about UFOs and referred to Podesta’s interests in the topics.

According to The Conway Daily Sun, Clinton said, “[Podesta] has made me personally pledge we are going to get the information out. One way or another. Maybe we could have, like, a task force to go to Area 51.”

Many news outlets, such as CNN, assumed Clinton made those comments in jest. However, Podesta’s comments to KLAS demonstrated to them that he takes the topic very seriously.

“I think I’ve convinced her that we need an effort to kind of go look at that and declassify as much as we can, so that people have their legitimate questions answered,” he said. “More attention and more discussion about unexplained aerial phenomena can happen without people who are in public life, who are serious about this, being ridiculed.”

To the surprise of many, Podesta has not shied away from the topic of UFOs as the manger of Clinton’s campaign. In fact, upon leaving his last position as an adviser for President Obama, he tweeted that his “biggest failure in 2014” was “once again not securing the #disclosure of the UFO files.”

In September of 2015, he then tweeted what has been interpreted by some as a challenge for reporters to bring up the topic of aliens with his candidate. After an interview by actress and writer Len Dunham, Podesta tweeted: “Great interview, @lenadunham. But Lena, ask her about aliens next time!! #TheTruthIsOutThere http://hrc.io/1jusxfk  cc: @HillaryClinton”

Thus far, The Conway Daily Sun seems to have been the only one to take up Podesta’s challenge.

In response to their UFO story on Clinton, Podesta tweeted: “Just in time for the X-Files revival. #TheTruthIsOutThere.”

Podesta’s reputation as a UFO buff and X-Files fan goes back to his position as former President  Bill Clinton’s Chief of Staff. He served in that position from 1998 until 2001. It is rumored that he had an X-Files themed birthday party at the White House.

However, perhaps his most shocking UFO related exploit was an appearance at a press conference at the National Press Club in Washington D.C. in 2002 in which he called for the release of classified UFO documents.

Podesta told the press: “It is time for the government to declassify records that are more than 25 years old, and to provide scientists with data that will assist in determining the real nature of this phenomenon.”

In the KLAS interview, Podesta told Sebelius, “I come in for my fair share of people asking questions about whether I am off my rocker, but I’ve been a long-time advocate of declassification of records.”

Bernie Sanders’ campaign has been UFO free. According to KLAS, when asked about UFOs, Sanders has said “he is far more interested in issues that are pressing for most Americans.”

The interview can be seen on the KLAS website here: http://www.lasvegasnow.com/news/i-team-clinton-aide-seeks-ufo-files