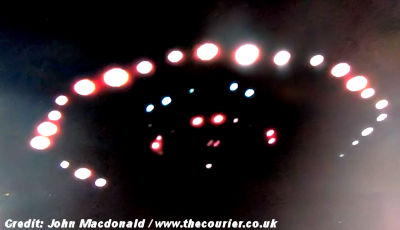 The quick-thinking Fifer managed to take a snap of the aerial object before it disappeared “in the beat of a heart”.

The 65-year-old from Dysart is convinced he saw an extraterrestrial aircraft at rural Rossie Ochil, to the south of Perth.

“It’s definitely a spacecraft of some sort,” he told The Courier. “I don’t know whether I frightened it or not with the flash of the camera, because in the beat of a heart it was gone.”

It happened at around 11pm on Sunday February 28 when he was driving home after visiting a friend.