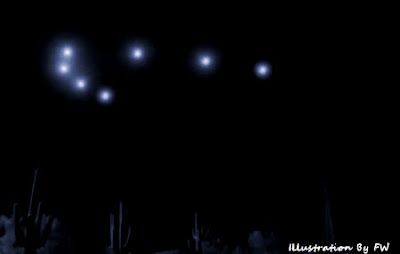 I decided to check them out since it was only a couple of blocks away. As I drove out of the parking lot I knew they weren’t streetlights. They were now a little higher than before but still close to the ground. I drove in their direction and could now see they were in the sky. Seven evenly spaced white lights in a “V” formation moving very slowly . . . really graceful. I tried to figure out what they were. Crop duster? Harriers? I turned south and tried to follow it so I could make out what it was. I rolled down my window to listen but it made no sound. I ruled out crop duster since the lights indicated it was at least as big as an entire field. I ruled out seven evenly spaced Harriers since there was absolutely no sound. I stared at the lights and even tough I was alone in my car, said out loud “What is that?” I couldn’t tell if it was seven separate objects or one object with 7 lights. If it was several objects they moved in perfect formation…evenly spaced and moved at the same time.

I had driven less than a mile and decided to make a U-turn and raced back to the TV station so I could catch the weatherman before he left. He had a pilot’s license and would certainly know what this is. As I drove back I kept glancing over my right shoulder to keep an eye on it. I didn’t want to lose sight of it. As I turned into the parking lot of the TV station, it was gone. “No no no no nooooo” I remember thinking.

I turned back tried to find it again. I drove for a few miles but it was gone. I don’t feel that the lights sped off. I think they just disappeared. From the time I opened the door to the time I lost sight of the lights, the whole thing lasted about 5 minutes. I was disappointed that I didn’t find out what it was but I let it go.

About a year later I was watching a show about UFO sightings. I saw the “Phoenix Lights” story and said “Oh my God! That’s what I saw!” Even though I had never given the lights another thought, I was thrilled to see that other people were questioning what they were because I still am curious to find out what they were.

I’ve read that some have downplayed these as being flares. But flares fall downward. What I saw was almost hovering, moving away and slightly upward. I’ve read that some reports say the lights were amber in color. The ones I saw were bright white yet they were not illuminating anything on the ground. I am excited to find out what it was that I saw but after ten years I doubt we will ever know. Even if I was proven to me that it was a government aircraft, I would be satisfied. I’m just not satisfied with stories of them being flares. I know they weren’t. I can’t tell you for sure what it was I saw, but I can tell you for sure what I didn’t see….and I didn’t see flares.