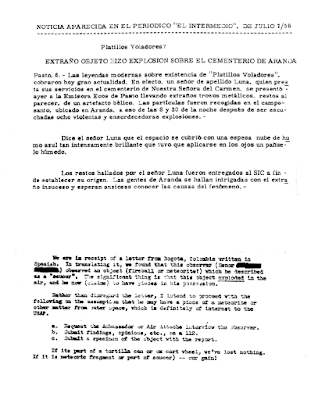 This report of July 6, 1956, prepared by the Colombian military, says that an unknown aircraft crashed in the cemetery of Pasto, Nariño, and the remains were taken to the premises of the then National Intelligence Service.

The Aranda case – of June 6, 1956 Colombia was listed by the US Air Force, within the file Project 10073, records of an unknown nature of military interest. The order to investigate this event unknown character in the city of Pasto was given by the Central Intelligence Command Air Base Wright Patterson , Dayton Ohio, under the control of Colonel GW Crabbe.

This is the same airbase that has been linked to the existence of Hangar 18 which has been said by weighted ex-military functions as custody area for the remains of several crashed extraterrestrial ships on our planet and the bodies of some of its occupants, including the supposed remains of the Roswell crash.

In the declassified document of the UFO event Aranda, San Juan de Pasto 1956 can identify important data, such as the mention of witnesses, gathering evidence represented by some metal pieces, the participation of SIC ( national police force of Colombia ), and the information significance in the local media assume a certain level of importance for the time.