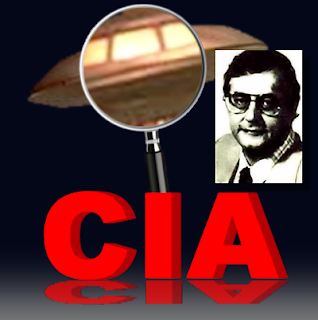 Regarding reports of crashed UFOs prior to the re-emergence of the Roswell affair, as recounted by Jesse Marcel in 1978, I offer comments by former CIA executive Victor Marchetti, who left the agency in 1969 and wrote the best-selling exposé,The CIA and The Cult of Intelligence

which laid bare some of the highly-illegal activities in which the agency engaged during the first two decades of its existence. [He wrote,]

‘During my years in the CIA, UFOs were not a subject of common discussion. But neither were they treated in a disdainful or derisive manner, especially not by the agency’s scientists. Instead, the topic was rarely discussed at internal meetings. It seemed to fall into the category of ‘very sensitive activities’…There were, however, rumors at high levels of the CIA…..rumors of unexplained sightings by qualified observers, of strange signals being received by the National Security Agency…and even of little gray men whose ships had crashed, or had been shot down, being kept ‘on ice’ by the Air Force at FTD (Foreign Technology Division) at Wright-Patterson AF Base in Dayton, Ohio.’

Yes, this was published in 1979, in the May issue of the now-defunct Second Look magazine—well after Marcel’s disclosures—but, again, Marchetti had resigned from the CIA some ten years earlier, therefore, the rumors he had heard had to have been circulating prior to that time.

I will also note that Marchetti’s use of the word ‘rumors’ results from his own non-involvement in the ‘very sensitive activities’ CIA had in play relating to the UFO phenomenon. Consequently, whatever information Marchetti was privy to derived from informal and probably unauthorized conversations he had with others at CIA headquarters.

But if accounts of crashed UFOs and alien bodies in cold storage were indeed discussed at ‘high levels’ within the agency, one might reasonably infer that those stories were being taken seriously.

Again, Randle initially told me that he never received this post via the normal Google Blogger route and was only able to post my comment after I sent a back-up in the body of an email to him. Today, however, he told me that he had eventually located the post. So, in this instance, the difficulties I have had posting Marchetti’s revelations in the past do not seem to apply.

Nevertheless, the issues I described at the beginning of this article did in fact occur—which prompted my sending the back-up message to Randle in the first place. A year or so ago, when I tried to post Marchetti’s exposé at journalist Billy Cox’ UFO blog, I was unable to do so. Although my posting effort was seemingly uneventful, he never received it. After Billy indicated as much, I tried again, but the second attempt met the same fate. Cox subsequently tried to post my comments himself, to his own blog, after I sent them to him in an email. He later told me that he had encountered the same unexplained and unprecedented problem. He eventually ended up posting the full text of Marchetti’s article in a follow-up piece.

In any case, the key point here is that former high-level CIA insider Victor Marchetti’s important revelations about the agency’s “very sensitive activities” relating to UFOs—decades after it had supposedly lost interest in the phenomenon—deserve widespread public attention. Therefore, I am asking persons reading this piece to forward the Cox article containing Marchetti’s disclosures to as many UFO and social media websites as possible.