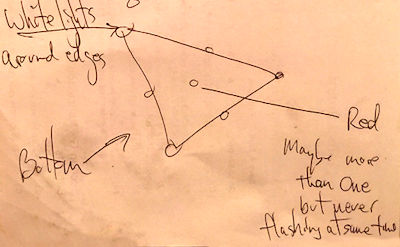 “At first I saw it coming,” the witness stated.“It was traveling slowly. It was not that high up in the air and it was an unusual constellation of lights so a grab my iPhone and I thought I should take a picture of whatever it is. And then it got closer and I got closer. We were converging right over Interstate 90.”

The witness first thought the object was something that could be identified.

“As it got closer and closer I thought it might be a group of helicopters. But they were in too tight of a cluster. I saw a constellation of lights that were in an abstract sort of triangular form. As the craft got closer, I kept looking up and I saw that there was a slightly lighter color to the body than the dark sky.”

The witness described the lighting on the objects.

“There were lights on all three corners and in between the corners with a dazzling white very, very white, bright, bright light. On the bottom there was a flashing red light. At least one. Maybe they were alternating from different positions on the bottom.”

The craft was traveling very slow and low to the ground.

“The craft was traveling very slowly. It was probably four to six telephone poles off of the ground. Not regular telephone poles, but the kind of tall ones that are along the interstate. If this craft was indeed triangular, it appeared to be traveling backwards away from the point.”

There was an aspect of this triangular pattern that was hard for the witness to comprehend.

“The lights seemed to be pointing toward me, not so much at me, but so bright that it looked like they were pointed at me, although it was not pointed at me at all. That’s how dazzling the lights were.”

As the object moved overhead, the witness thought there was structure to the object.

“As the craft approached the highway before it crossed over me, I thought it could be a structure, a linear structure like I-beams or something that have lights along it and it was not a flat triangle. It appeared to have a flat aspect, but the front seemed to be folded a little making it like two long, skinny triangles, but only in the front.” […]