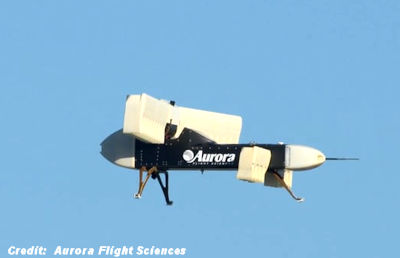 Built by Aurora Flight Science, the ‘Subscale LightningStrike’ relies on 24 fans to propel the 325 pound scale model and enable vertical takeoff and landing (VTOL). Not shown in the video, but planned on the full-sized version, is the ability for these propellers to rotate to provide thrust in addition to assisting in take-off and landing.

The full-sized LightiningStrike, once completed, is said to be capable of speeds of 400 knots (about 460 mph) while carrying several thousand pounds of cargo (without a pilot) and running entirely on electric power. […]