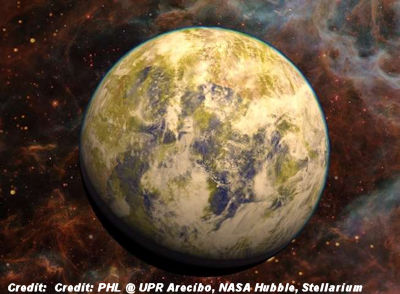 Gliese 832 is a red dwarf and has just under half the mass and radius of our sun. The star is orbited by a giant Jupiter-like exoplanet designated Gliese 832b and by a super-Earth mass planet Gliese 832c. The gas giant, with a mass of 0.64 Jupiter masses, is orbiting the star at a distance of 3.53 AU, while the other planet is potentially a rocky world, around five times more massive than the Earth, residing very close its host star—about 0.16 AU.

Now, a team of astronomers, led by Suman Satyal of the University of Texas at Arlington, has reanalyzed the available data on this nearby planetary system hoping to find more extrasolar worlds that may be located in a vast space between the two known planets. […]