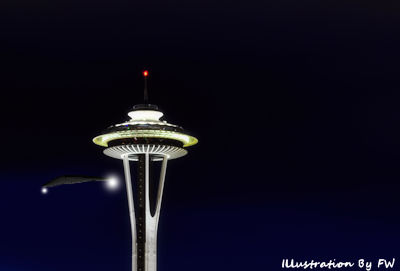 “As I looked toward the Space Needle, I saw what first seemed like a fast jet coming from the east, heading due west toward Puget Sound, slightly to the north of us,” the witness stated.“Not a sound throughout sighting.”

“Hadwo twhite, blinking lights pulsating in unison at approximately 1 Hz, as if each wing, left and right, had a big, white light covering most of the wing surface, but could not discern forward fuselage or tail, hence looked like it was a flying straight wing.” […]

The witness first thought the object could be an airplane despite the unusual white lights pattern.

“I am familiar with airplanes; am engineer working in aerospace. Could be soundless if it might be much higher than it seemed; for instance, despite white lights flashing, thought they could still be landing lights.”

The witness paid attention to how the object moved.

“The object flew in a straight line while displaying white, pulsating lights, very fast, but at perceived constant linear speed, as it subtended an angle of approximately 45-degrees from my viewpoint and initial spotting. Covered this angle in not more than 10 seconds. Given estimated altitude of twice the height of the Space Needle or more, that would still be very fast for a soundless flight; much too fast for a small drone, or for a helicopter if higher in altitude; yet could not be high enough to be soundless, which would have meant extremely fast.” […]