In our article Violent Shaking Along The Ring Of Fire, The Pacific Is Moving we reported that the MIMIC (Microwave Analysis of Total Precipitable Water) data from April 5 and April 14, 2016 showed us very large unusual waves anomalies, presumed microwave energy, from an unknown source.

While millions of Americans are still regularly ridiculed by those who are either not yet aware of chemtrails, weather modification and weather warfare, now the MIMIC data from April 21, 2016 has shown another huge wave anomaly and this time the anomaly covers New York and the upper East coast. 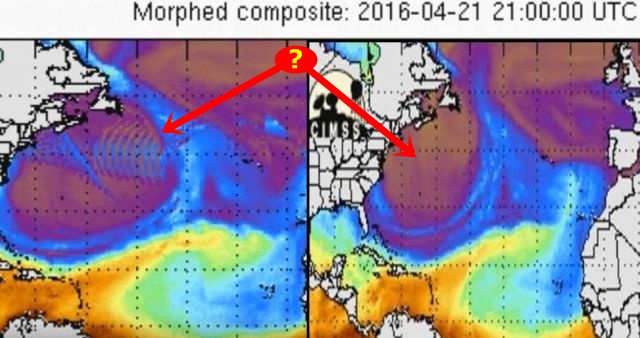 We are experiencing a global uptick in quake activity and it seems these huge anomalies appear before a series of strong earthquakes which indicates that these anomalies are artificially and thus a clear signal of the reality of weather modification and weather warfare.

Yet there is a massive earthquake activity cover-up and data being censored globally.

The Japan Meteorological Agency has stopped announcing the probability of aftershocks in Kumamoto Prefecture because past occurrences are not providing the guide they did before, according to an agency official.

The decision to stop announcing estimates is unusual, since the JMA has always released probabilities, with the exception of earthquake swarms.

Aftershock probabilities are usually calculated based on data compiled from past cases, like those indicating the downward trend in the frequency of aftershocks. The JMA would typically make announcements such as, “Over the next three days, there is a probability of aftershocks measuring lower 5 or higher on the Japanese seismic intensity scale of 7.”

Add to this the fact that Major Earthquake Tracking sites like USGS Are Severely Downgrading or not even Listing Earthquakes from around the globe.

One thing is for sure, the ones responsible for letting us know what’s going on, are keeping information from us on a global scale.

You start to see we have a big problem!