Scientists are now warning of over 100 years of back pressure building along the 800 miles of the San Andreas Fault Zone in California.

Southern California’s section of the San Andreas Fault is ‘locked, loaded and ready to roll,’ a leading earthquake scientist said Wednesday at the National Earthquake Conference in Long Beach. 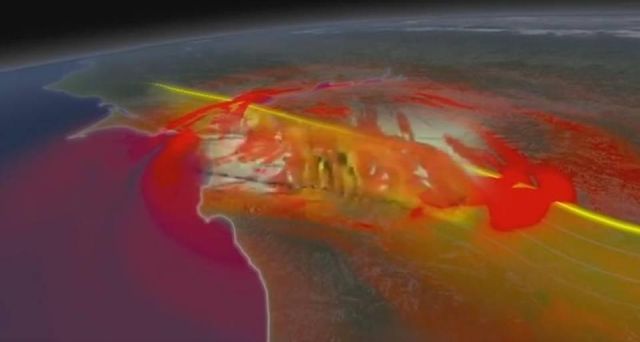 The last big earthquake to strike the southern San Andreas was in 1857, when a magnitude 7.9 earthquake ruptured an astonishing 185 miles between Monterey County and the San Gabriel Mountains near Los Angeles and it has been quiet since then, too quiet, said Thomas Jordan, director of the Southern California Earthquake Center.

Other sections of the San Andreas Fault also are far overdue for a big quake. Further southeast of the Cajon Pass, such as in San Bernardino County, the fault has not moved substantially since an earthquake in 1812, and further southeast toward the Salton Sea, it has been relatively quiet since about 1680 to 1690.

Scientists are calling for a very large Earthquake to occur soon. If this Fault lets go it will be one of the biggest natural disaster ever possibly triggering other Faults.

In the video below BPEarthWatch informs us about the current situation. The animation simulates what would happen if a M7.8 earthquake struck along the southern section of the San Andreas Fault.

Many Faults cut across California’s coastal region. What might an earthquake look like along the Hayward Fault?

California Academy of Sciences made a computer simulation depicts one scenario. (Video below).