The reporting witness was a passenger in a vehicle driven by her boyfriend southbound along Route 11 between Watertown and Adams at 11:45 p.m. on May 9, 2016.

“At about 11:45-ish we saw lights on the road up ahead and the picture just didn’t make sense to us,” the witness stated.“At first it looked to me like maybe a fire truck up ahead or something, but the closer we got the less sense the image we were seeing made.” 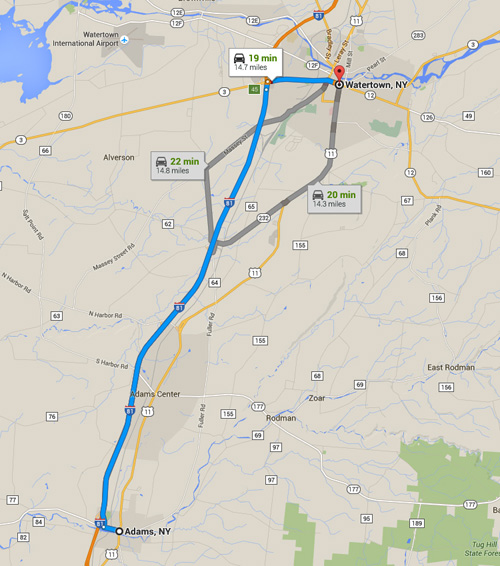 Adams, NY, is about 14 miles southwest of Watertown, along Route 11. (Credit: Google)

The two continued in the direction of the object, coming up on it fast, within seconds.

“They were in fact closer to us than I thought, maybe a quarter-mile from where we first noticed the lights. We had to slow down fast or we would have driven right underneath and past them. My boyfriend came to a stop so these things were drifting across the road right in front of us. We were driving south on Route 11 so they were drifting across the road in a southwest direction, and right over the road in front of us. They turned around and drifted back the direction they had been coming from; northeast.”

The two got a good look at the objects.

“Because they turned around in front of us, we got to see just about every angle of these things except the top, so it was not an optical illusion and we could tell how close they were to each other and to us. We saw them up close, clearly, and in 3-D. It was dark, but there were street lights and our headlights and they had blinking lights, red and white only, the whole time we saw them.”

“I had turned off the heat and radio as we came upon them, and I immediately stuck my head right out the window for the best angle, and two things struck me right away. First; the silence. They made no noise that I could detect above the noise of our vehicle, which is not loud. Second; their proximity to each other. They were so close together I would think they would be bumping into each other. When they turned around I thought we were going to witness a crash. They were only a few feet from each other. And they never split up when they were in our sights, but they moved independently, not like they were attached.” 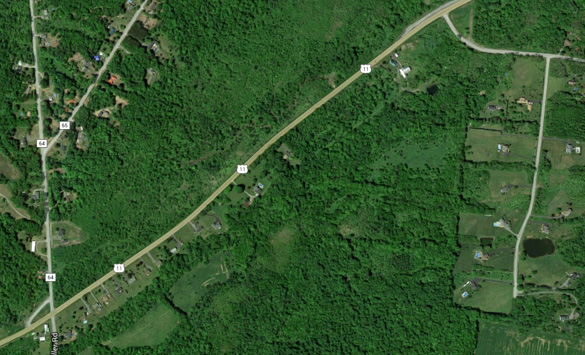 The witness and her boyfriend were southbound along Route 11 heading into Adams from Watertown. (Credit: Google)

The objects were large.

“The craft were about the size of limousines, lazily floating over the road not far above the telephone poles. They were both triangular, but they were not the same. One was a wider triangle, like you might picture a military drone or something, but the other one was a skinny, pointy triangle. Both had, I believe, red blinking lights in the front corner on the bottom, and white blinking lights on the side corners on the bottom. Besides being triangular in shape and the lights, they were completely featureless, at least from the bottom and sides. Just perfect triangles, no other angles or patterns at all. Just black.”

The witness had never seen anything like this before.

“Like even any drones I look up that belong to any military or even anything out of Popular Science, nothing I’ve seen is a perfect triangle like that. They all have some other angles, discernable wings, engines, something. They were both like that, exactly the same except for the shape of the triangle. We were so close that if there was any other detail to notice in their shape, we would have seen it. We should have been able to see detail, but it was just their outlines, the lights, and flat matte black.”

It was a clear night.

“There were stars out and they blocked their light, blocked the lighter color of the horizon behind them. There was no light reflecting off them, and there should have been. There were all these lights like I said, and not one glimmer of a reflection off any part of them. And the lights that came off them were bright but not blinding; there was no glare, even so close. And my eyes have a problem with glare and bright lights. But not these.”

The objects stopped and turned around.

“After they turned around and we just gawked for what seemed like minutes, but must have been seconds, a spotlight shown coming from the side of I think the skinny one, right off the tip of the wing or side corner of the triangle. It shown in our direction, but I think it shown over us, not right on us… and then they were drifting over the trees back in the direction they seemed to have come from.”

The witness told her boyfriend to hurry up and chase them and not to lose them.

“I kept my eyes on them and could see the lights through the trees, and directed my boyfriend where to go, but I lost them through the trees. I could see them and then they were just nowhere. My boyfriend took a route that should have cut them off, if they had continued their speed and direction, and we drove around with my head out the moon roof searching and finding hilltops to search the horizons, but nothing. They were gone.” 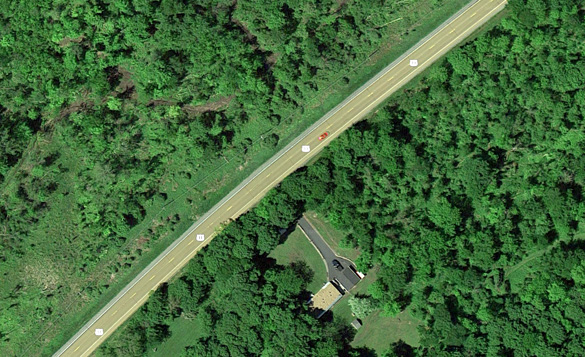 The couple had to stop their vehicle along Route 11 to avoid driving underneath the two UFOs. (Credit: Google)

The two then drove around looking for a police car, but could not find one.

“We finally gave up and went home and I think it was close to 1a.m. I was determined to alert authorities. I knew they wouldn’t exactly believe us, or do anything about it, but I just wanted it on record, wanted someone to know that happened, and I’m just so curious, and I was hoping that we wouldn’t be the only ones! I figured they would get more calls, more reports. I thought with them being right above the ground and apparently in no hurry, someone else around must have noticed something. It’s a rural area, but right smack in between Adams and Adams Center.”

The witness called Jefferson County Police, but the state troopers showed up first.

“The troopers said they would check around with Fort Drum and stuff and were nice, but obviously didn’t take it very seriously, which is the best I really expected. I’m just hoping something else turns up. I want some more news. Even if it isn’t extra-terrestrial drones or something, it still had to be some sort of secret technology or something that not many people have witnessed, and that’s still amazing to me.”

New York State Section Director John Lombardo and Chief Investigator Nicholas Voulgaris are investigating. Please remember that most UFO sightings can be explained as something natural or man-made. The above quotes were edited for clarity. Please report UFO activity to MUFON.com.