Strange things happen in the sky. Unexplainable sky phenomena are seen by people around the world.

Recently, Michelle W has taken some very strange pictures from the sky over Central Texas. 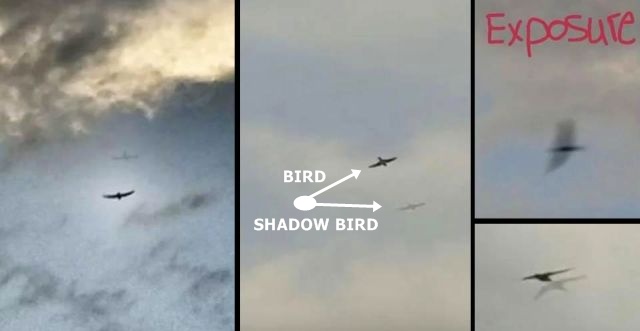 Michelle: “The sky is reflecting the birds in my pictures. The question is, how is this happening? Is it from the aluminum particles in the NASA tracers or chemtrails? I have reviewed several of my sky pictures and found many bird reflections and mirrored images.”

The strange sky phenomenon has something to do with chemtrails? The amount of heavy metals in the atmosphere is so heavy that the density of clouds is thick enough to cast a shadow?

As we know, there is a lot of upper atmosphere and outer atmosphere (space activity) being shielded from the population. Consequently, the reflections in the sky are the result of atmospheric manipulation of the color spectrum and multiple light sources in space?

Or the images captured by Michelle could be proof that we exist in a matrix? That we’re living in a virtual programmed world and the bird and its reflection is a simulation, a three-dimensional image coded onto a two-dimensional surface?