By Paul Dean, 2 June 2016
(UFOs – Documenting The Evidence, Melbourne, Australia)
In this article, Paul Dean reports on U.S. military OPREP-3
reporting system documents that deal with major UFO cases
that involved U.S. military bases (the 14 May 1978 Pinecastle
Electronic Warfare Range (Florida) incident and the late 1975
UFO incidents that occurred over the northern tier (U.S./Canada)
Strategic Air Command (SAC) bases).
Quote from the article:
“While going through the officially declassified and release that relate to the spooky 1975 US/Canadian border Northern Tier ‘over flights,’ as well as other 1970’s–era UFO cases, I noticed a specific term repeatedly appearing in the documents that piqued my interest. The term was ‘OPREP–3,’ sometimes followed by the terms ‘PINNACLE,’ ‘BEELINE’ or ‘NAVY BLUE.’ Upon further study of statements of American military doctrine – both old and new – it became quickly apparent that these terms refer to a specific type of ‘operational reporting’ system used by the US Armed Force. ‘OPREP’ means ‘Operational Report,’ and ‘3’ refers to a category meaning ,Event/Incident Report.’ There are dozens of available publications that detail the OPREP–3 process. One such publication, promulgated by the Chairman of the Joint Chiefs of Staff (CJCS), is an Instruction dated 1st of December, 1993, titled ‘Joint Reporting Structure Event and Incident Reports.’ Page 1 establishes:
‘The OPREP–3 reporting system… …is used by military unites at any level of command to report significant events and incidents to the highest levels of command.’
Another publication, titled ‘Air Force Instruction 10–206 Operational Reporting’ (AFI 10–206), and promulgated by the Secretary of the United States Air Force (SEC–USAF) on 15th October, 2008, states in Chapter 3:
‘Command Posts use the OPREP–3s to immediately notify commanders of any significant event or incident that rises to the level of DoD, AF, or MAJCOM interests. Submit the applicable OPREP–3 regardless of whether or not the event is being reported through other channels.’
When records relating to the case (1978 Pinecastle) were released under the Freedom of Information Act (FOIA), even the Public Affairs officer, N. P. Young, stationed at Jacksonville Naval Air Station (NAS Jacksonville), who processed the records, had this to say about the incident:
‘I have never been a believer in UFOs, but I assure you I am convinced that a number of people witnessed an unexplainable event that night.’
Note the term ‘OPREP–3.’ Further, beneath this line, the telex reads:
‘REPORTS OF UFO DISPLAYING RED, GREEN AND WHITE LIGHTS’
Two more lines down the telex states:
‘INITIAL REPORTED UFO SIGHTING BY TWO UNIDENTIFIED CIVILIANS’
Note the term ‘UFO’ is openly used here. This is indisputable proof that a UFO event, of some sort, caused the sending of an OPREP–3 to the CINCLANFLT. I have imaged the page below.
As the above document is not easy to read. For clarity, I have clipped the two sections of the above page to make absolutely clear that the terms ‘OPREP–3’ and ‘UNIDENTIFIED OBJECT’ are used. Like the NAS Jacksonville telex, this is documented proof that an unidentified object behaving oddly above the nuclear storage igloos at Loring caused enough concern that this OPREP–3 report was issued.” 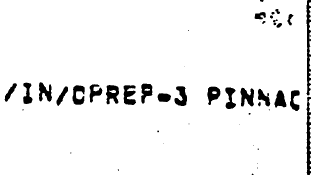