The evidence in history seems to imply just such the further back you look.

They were depicted in two different ways, one, as humanoid and the other, as some kind of bird-man. 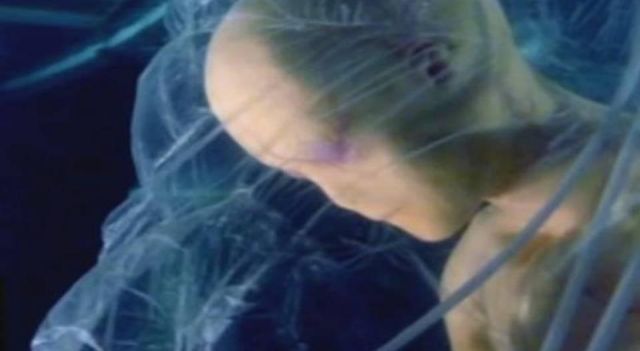 The most ancient of all Chinese texts is the mysterious ‘I Ching’ which describes how humans were genetically modified by a Goddess known as ‘Nu Kua,’ she was a reptilian, who’s descendants became the Emperors of China. Even the ancient Shaman spoke of them.

An apparent race, back in history, also, lost control of planet earth to a vicious race of reptiles with dragon faces.

The further one looks into history they continue to find mention of a returning race of reptiles with dragon faces driving circular spaceships.

Scientists speculate that if we ever did encounter aliens from outer space, they would we more like intelligent dinosaurs, as cunning and smarter than humans.

The Dropa Stones are, estimated, to be 12,000 years old and date back to the age of Atlantis. They contain more claims of people traveling in space ships. The spiral grove is actually composed of tiny hieroglyphs that tell the incredible stories of spaceships from some distant world that crash landed into the mountains (is there any wonder why the Dropa stones disappeared?).

‘The Kabbalah’ is a collection of texts which are forbidden to be studied before the age of 40, and teaches that there are different, invisible parallel universes that intersect with our own reality.

Sumerian cuneiform tablets and cylinder seals made in ancient Iraq, the former Kingdom of Babylon, tell the story of two extra terrestrial star Gods coming to earth and genetically manipulating mankind. These aliens star gods were called Enlil and Enki. There alien race was called the ‘Annu-naki,’ which, roughly, translated means: ‘prince’s of the royal genetic seed.

On every continent of the planet earth there are giant temples which are aligned with the stars of the planets.

I could continue onward with this list into the thousands, and all from history older than you, or any one you know, and as far back as they, or you, can think into history.

In the past non humans were among us and to date they are still here on Earth.