The pharaoh, who ruled Ancient Egypt between the years 1332 and 1323 BCE, was hidden away in his tomb until its excavation in 1922, along with this highly ornamental blade.

A team of Italian and Egyptian researchers’ cutting-edge X-ray analysis reveals that the knife, which was originally discovered by Howard Carter in 1915, is mostly composed of iron, along with smaller amounts of nickel and cobalt. This unique elemental composition indicates that it was built using material from one of the oldest objects in the Solar System: an iron meteorite.

Researchers have even narrowed down the dagger’s origin, a meteorite called Kharga and weighs over two pounds and was found near the northern coast of Egypt in 2000.

The earliest known iron artifacts are nine small beads, dated to 3200 BC, from burials in Gerzeh, northern Egypt, identified as meteoric iron shaped by careful hammering.

From the 13th century B.C., Egyptians started using a hieroglyph that translates as “iron from the sky,” and despite most researchers believe the hieroglyph refers to rare iron meteorites, falling from the sky, it can also refer to something entirely different, like UFOs piloted by extraterrestrial races who visited ancient Egypt. 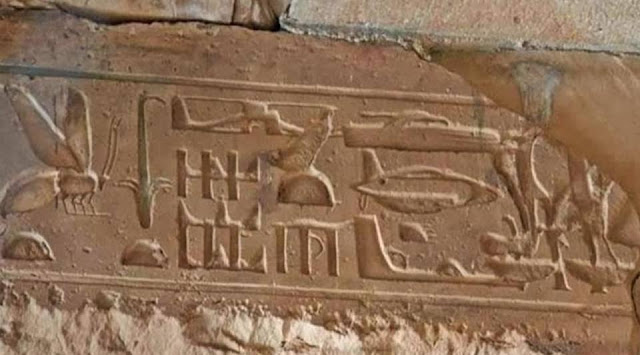 If the dagger is made from the so-called Kharga meteorite then traces of processing should be left on the meteorite, but till now researchers refuse to show us the Kharga meteorite.

So we may wonder whether the dagger is really made from the Kharga meteorite or is it made from material left behind by aliens from outer space!