Kat Martin2016: I was watching the ISS live stream, and all of the sudden it did this. It looked like they were trying to see something on the ISS itself. This was followed by a lot of discussion by the Russian crew but I have no idea what they were saying. 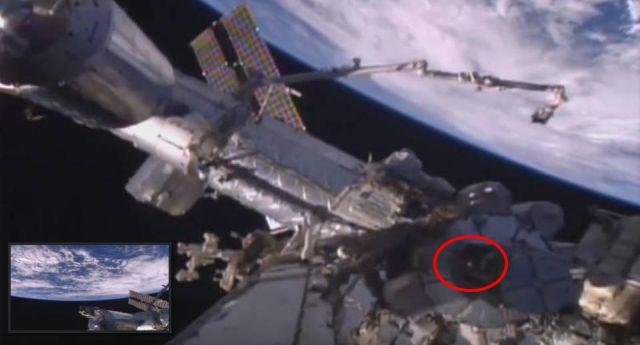 Not sure what it could be, but at 0:34 check this out…divide the screen into fourths, then look at the lower right-hand corner, where the horizontal body meets the roundish shaped equipment, there’s a ragged gap there. It looks like something (a tiny round object) flies in over the top, past that ragged gap, and almost at 0:36, is silhouetted against the dark colored equipment. At 0:37, it just touches the round blue equipment with the cross-marking, then disappears shortly thereafter.

At first I guessed ice, but it wouldn’t sublimate that quickly while in frozen state, so I don’t know what it could be…but it’s an interesting coincidence that they panned the camera right at that particular moment.