From UFOs hovering over airports to things trailing airplanes to things falling from the sky and leaving strangely shaped holes in the ground. 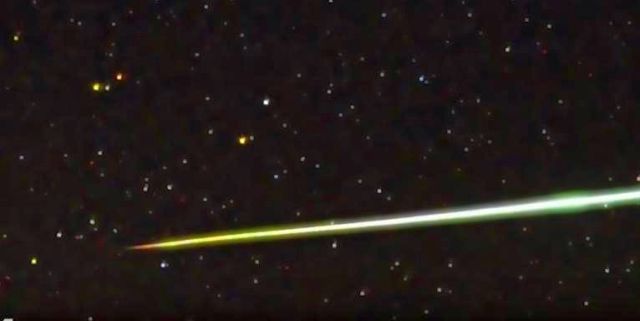 When flying saucers reports come from a small-town hillbilly with more eyes than teeth you’ll probably take their story with a pinch of salt and file it away under “crazy guy who wants attention”. But when someone credible spots a UFO, that’s when the world sits up and takes notice; and that’s exactly what happened at Chicago’s O’Hare International Airport in 2006.

Most stories about strange things in the sky involve objects or phenomena people can see, but our next entry instead concerns a series of mysterious sounds, sounds so loud they can be heard from North America through to Europe and Africa.

On May 25th of this year an unidentifiable craft was spotted hovering over Dayton, Ohio in a clip filmed by a couple sat watching the sunset from their home, and this is the third separate sighting of this craft within recent months. Technically as this thing is hovering and not flying we’ll have to call it a UHO, but whatever it is it was mooching around suspiciously close to the nearby Wright-Patterson Air Force base.

2016 seems to be pretty big on two things – dead celebrities and strange sky phenomenon, because our next entry involves yet another mysterious unexplained incident which occurred just recently on June 1st in Kawerau, New Zealand.

Those New Zealand lights were pretty mysterious and subtle in appearance, but this UFO seen above the skies of one Russian city was about as subtle as a brick to the face. Mysterious footage shot in March 2015 was posted to Reddit last year showing a gigantic bright light travelling above a town called Kizel in the county of Perm. Nine days later, the Moscow Times newspaper reported a twenty metre sinkhole had appeared randomly nearby, yet no official statement has been made as to what caused it, and whether the two were linked.

In May 1917 three Portuguese children on their way home from tending to their sheep claimed to have met the Virgin Mary. Now we all know kids make stuff up just for attention, they’ll claim the dog ate their homework, the kid next door took that dump in the swimming pool, yadda yadda yadda. But on this occasion it seems these children weren’t talking baloney, because after they claimed that Mary would return on the 13th day sometime within the next six months she did exactly that, and something very strange happened upon her arrival.

July 7th 2015, a Virgin Atlantic flight takes off from New York’s JFK Airport, when this happens…an unidentified object flies dangerously close to the aircraft at such high speed that it actually overtakes it. The object seems to get shorter and wider whilst it moves through the air, before disappearing out of shot as the plane continues safely.