One of the most intriguing ancient texts, the Tulli Papyrus chronicles one of the earliest mass UFO sightings.

It also has an interesting backstory. In 1933, Alberto Tulli, director of the Egyptology section of the Vatican Museum, discovered a unique papyrus in one of Cairo’s antique shops. Unfortunately, it was priced too high – even for the Vatican – so Tulli resorted to copying down its contents.

When he later returned, the papyrus was gone. Two decades later, Italian Egyptologist Prince Boris de Rachewiltz announced that he had located the original papyrus “untranslated and unpublished.” 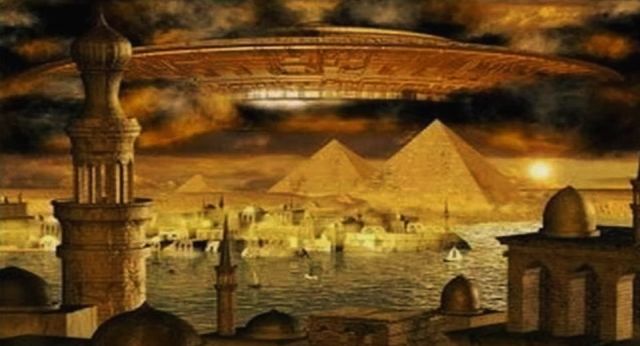 The original papyrus has been translated by Boris de Rachewiltz and several others. The content seems to revolve around “circles of fire” that flew through the sky on two separate occasions, separated by a few days.

The so-called “circles of fire” might possibly be explained by natural phenomena; however the interpretation of the text points to “fiery disks” and while incomplete, the ancient papyrus painted a pretty clear picture of mass UFO sightings.

Below Rachewiltz’s translation of the Tulli Papyrus:

In the year 22 third month of winter, sixth hour of the day the scribas of the House of Life found it was a circle of fire that was coming in the sky (Though) it had no head, the breadth of its mouth (had) a foul odour.

Its body 1 rod long (about 150 feet) and 1 rod large, It had no voice… They hearts become confused through it, then they laid themselves on the bellies

They went to the King ..?) to report it. His Majesty ordered – has been examined – as to all which is written in the papyrus-rolls of the House Of Life His Majesty was meditating upon what happened. Now, after some days had passed over these things, Lo! they were more numerous than anything. They were shining in the sky more than the sun to the limits of the four supports of heaven.

Powerful was the position of the fire circles. The army of the king looked on and His Majesty was in the midst of it. It was after supper. Thereupon, they (i.e. the fire circles) went up higher directed to South. Fishes and volatiles fell down from the sky. (It was) a marvel never occurred since the foundation of this Land! Caused His Majesty to be brought incense to pacify the hearth – to what happened in the book of the House of Life – to be remembered?) for the Eternity.