The gas giant has put on a beautiful light show in the form of auroras the size of Earth at its north pole. The Hubble Space Telescope captured the display.

Unlike the auroras here on Earth, which show up as visible light, Jupiter’s electric blue whirl is ultraviolet, so you wouldn’t be able to see it as depicted in the composite image above. But Hubble is able to capture the incredible detail. 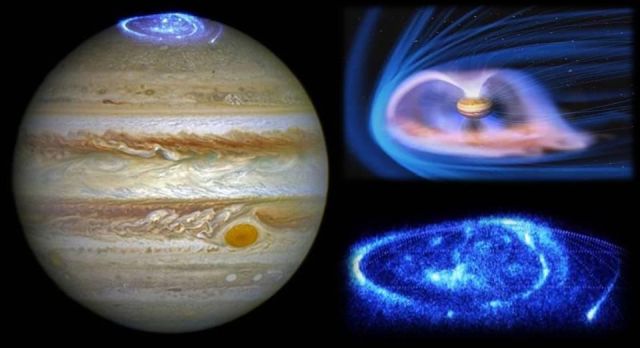 Auroras are created when high-energy particles from the solar wind interact with a planet’s magnetic field. The auroras at Jupiter’s poles actually never stop, revealed NASA.

The stunning images have captured the world’s imagination just as NASA spacecraft Juno arrived at Jupiter after a 5 year long voyage.

Juno crossed the boundary of Jupiter’s immense magnetic field and its Waves instrument recorded the encounter with the bow shock over the course of about two hours on June 24, 2016. “Bow shock” is where the supersonic solar wind is heated and slowed by Jupiter’s magnetosphere. It is analogous to a sonic boom on Earth.

The next day, June 25, 2016, the Waves instrument witnessed the crossing of the magnetopause. “Trapped continuum radiation” refers to waves trapped in a low-density cavity in Jupiter’s magnetosphere.

Juno may also help scientists solve mysteries such as why it’s Great Red Spot is shrinking. According to space.com this storm feature has been known to astronomers ever since telescopes were first available in the early 1600s. But since 1930, astronomers have noticed the storm getting smaller and smaller; in 2014 it was at its smallest stature ever. Once estimated as large enough to fit three Earths across its width, the storm is now no bigger than Earth’s diameter.