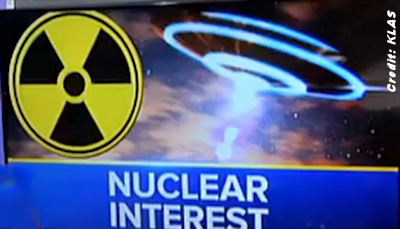 A group of more than 150 military veterans, missile officers, and security personnel, including many who worked at the Nevada Test Site, say they’ve seen mystery intruders over nuclear facilities.

In the darkest days of the Cold War, atomic weapons were routinely exploded above ground at the Nevada Test Site, the most nuked placed on earth.

In 1955, 14 A-bombs were detonated as part of Operation Teapot, witnessed by thousands of military personnel in trenches, and by thousands of test site employees. But there were other observers as well.

“It was what we called flying saucers. They were pretty prevalent at the test site back then,” said a former test site photographer.

At least a dozen former test site employees have told similar stories about unknown aircraft showing up hours or days after an atomic blast. …