By Paul Dean, 22 June 2016
(UFOs – Documenting The Evidence, Melbourne, Australia)
Quote from the article:
“ ‘OPREP–3 reports containing information relating to unknown objects near US military installations are considered extremely sensitive, and thus not releasable.’
That was the extraordinary statement made by the Office of the Secretary of Defence (OSD) in a 1990’s–era reply letter to UK based researcher Dr. Armen Victorian, as we shall see.
In Part 3 of this series I will discuss efforts, past and present, to have the US government release OPREP–3 records that relate to UFO incidents. For those who are unfamiliar with this particular topic, an ‘OPREP–3’ is a type of US military report that conveys urgent, national security information to the highest echelons of the US government. ‘OPREP’ means ‘Operational Report,’ and ‘3’ refers to a category meaning ‘Event/Incident.’ In Part 1 and Part 2, I demonstrated that OPREP–3’s have been used to report UFO’s, or at least very unusual and unidentified aircraft, hovering or flying over sensitive US military installations. I also went to some length displaying actual OPREP–3 records, which, I think, is absolutely critical in establishing the authenticity of these claimed intrusions.” 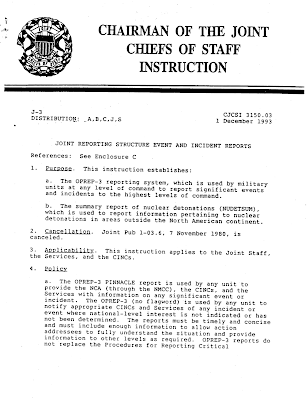