Curiosity Mars Rover accidentally photographs a skeleton of a tiny humanoid being?

According to Paranormal Crucible, it is an ancient Martian skeleton and it has a large skull adorned with an ornate or decorative head piece. This is undoubtedly the skeletal remains of an alien humanoid in his opinion. 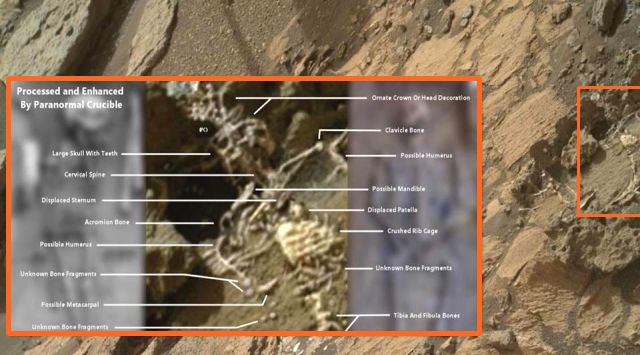 Paranormal Crucible has cross referenced the relic’s remains and compared them with bones found in humans, and the comparison is undeniable.

This added to previous discoveries of skulls, bones and skeletal remains of animal and human-like beings confirms without doubt that Mars did have life on it.

The image is gently colorized to bring out the details we can see in the video.