A rare phenomenon appeared in the sky on July 4, 2016 over the Moscow region Zvenigorod Aline Abayeva in Russia. A local resident who was able to film the strange spectacle in the sky, a so-called Crown Flash, uploaded the video to VK. 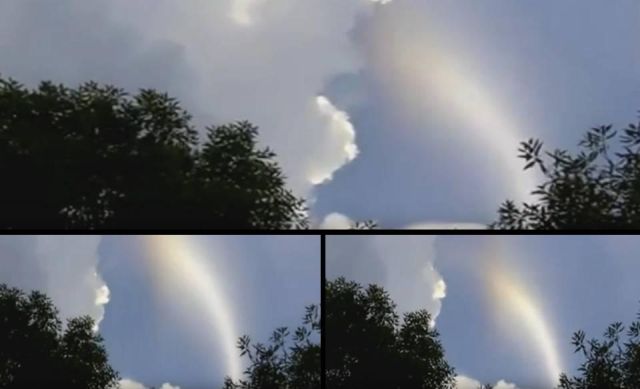 Crown flash is a rare but observed phenomenon involving “The brightening of a thunderhead crown followed by the appearance of aurora-like streamers emanating into the clear atmosphere”.

The current hypothesis is that sunlight is reflecting off or refracting through tiny ice crystals above the crown of a cumulonimbus cloud.

These ice crystals are aligned by the strong electro-magnetic effects around the cloud, so the effect may appear as a tall streamer or pillar of light.

When the electro-magnetic field is disturbed by lightning flashes within the cloud, the ice crystals are re-orientated causing the light pattern to shift very rapidly and appear to ‘dance’ in a strikingly mechanical fashion.

The effect may also sometimes known as a “leaping sundog”. As with sundogs, the observer would have to be in a specific position to see the effect, which is not a self-generated light such as seen in a lightning strike, but rather a changing reflection/refraction of the sunlight.

This phenomenon is regarded as rare and not well documented.