An amazing crop circle with an alien face depicted in the circle was discovered at Reigate Hill, nr Reigate, Surrey on July 19, 2016.

A second crop circle showing a mysterious alien message was discovered at Burderop Down, near Barbury Castle, Wiltshire UK, just one day later on July 20, 2016. 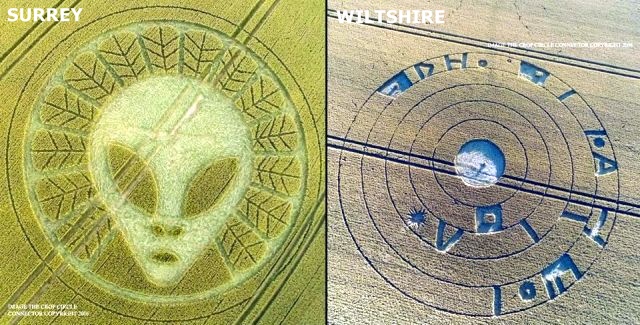 What is the meaning of these two crop circles, they want to share information about our solar system?

The face of an alien depicted in the crop circle in Surrey refers to the White Wizard, the Magican whose powers are activated by wisdom that emanates from the heart?

The message in the Wiltshire crop circle is the answer or information how to use energies of the White Planetary Wizard which Year started on July 19, 2016?

Can you solve the alien message?

Large and clear aerial and ground shots of both circles via CropCircleConnnector: