Cancun’s live stream webcam caught something strange in the sky over Cancun, Mexico on July 23, 2016.

On a clear day suddenly a rainbow shaped cloud appears above a single cloud and what looks like a funnel cloud emerges from the rainbow cloud. 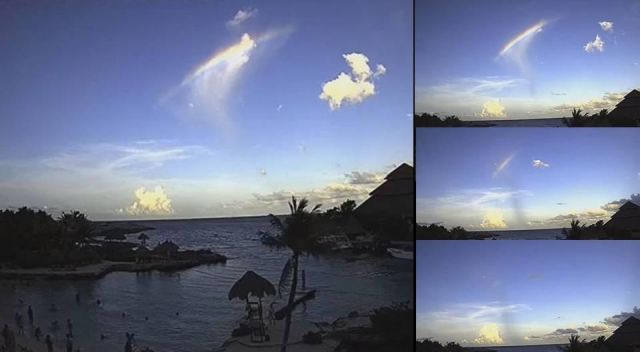 According to video uploader KateMartin2016 the glowing rainbow is exactly the same as earthquake lights seen just before major quakes in many parts of the world. It doesn’t mean there will be a big quake, but there could be one on the way. Many times, when these are seen, a quake may happen many hours after seeing them.

But to me, an earthquake light not produces a funnel cloud, even more, a funnel cloud form most frequently in association with supercell thunderstorms.

Given the fact that this funnel cloud appears from below the rainbow shaped cloud on a clear day makes me wonder whether it is a cloaked UFO sucking water out of the ocean, whereby sunlight reflects around the outer edge of the UFO with as result the UFO becomes partially visible.

Another strange thing is that the cloud formation slowly disappears into thin air, leaving the funnel cloud behind.