The Kilauea volcano in Hawaii is one of the most active volcanoes in the world and has been continuously erupting since 1983. On July 27, 2016 the volcano erupted again and lava from the volcano’s Pu’u O’o crater finally reached the sea for the first time since 2013. 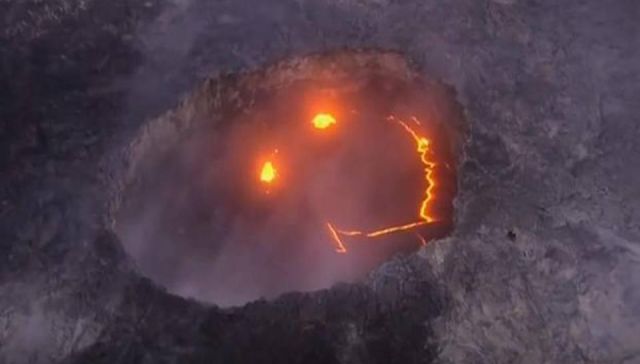 Quote: Starting the day with a smile!

Despite the US Geological Survey has warned visitors about safety risks, the phenomenon attracted thousands of tourist’s intent on seeing the molten red mass hitting the water.

But it was not only the spectacle of the lava when it reached the sea… the volcano appears to be smiling.

Mick Kalber of helicopter tour company Paradise Helicopters who recorded the event saw something strange inside the crater what appears to be a smiley face.

He captured the remarkable smiling face inside the crater which can be seen from above the volcano’s crater.