community personality is accused of possessing and distributing child pornography.

The Stan Romanek saga is out of the ordinary even by ufology standards, and that was the case long before his Feb. 13, 2014 arrest. It is unusual for a number of reasons, including because it is often considered utterly unbelievable. This is in a genre in which first hand accounts of alien spacecraft and their occupants are routinely exchanged with casual acceptance.

One of the things making Romanek’s claims so difficult to buy is that he repeatedly led with the chin where angels fear to tread. He presented evidence intended to support his claims, yet when the “evidence” frequently went south, the persecution card was played. This was typically done under extremely shaky circumstances in which even the most willing to believe tended to doubt Romanek’s accusations of government plots to discredit him.

Although Stan’s efforts indeed led some to promote his saga as the most thoroughly documented alien abduction case ever, it would equally be true that his “evidence” did not produce the validation he likely sought. Romanek may at times have been his own worst enemy.

Take, for instance, when James Carrion reported the word “follow” was misspelled as “fallow” in a report Romanek submitted to the National UFO Reporting Center. The word was then misspelled the same way, “fallow,” in correspondence allegedly written by independent witnesses. Three of them. The spelling-challenged witnesses, two of which were supposedly physicists, to the best of my knowledge have yet to be produced or verified to exist.

“Fallow” also surfaced in an alleged Air Force document Stan presented that was titled “Project Romanek.” He claimed the doc was left in his mailbox.

The word fallow shows up in Stan’s original UFO reports to the National UFO Reporting Center.

The word fallow shows up in the UFO report to the National UFO Reporting Center by a 3rd party witness that allegedly had no relationship to Stan Romanek but corroborates one of his sightings.

The word fallow shows up in an alleged Air Force document that Stan mysteriously received in his mailbox, subject “Project Romanek.”

The word fallow shows up on the Jeff Rense website in an online posting by alleged physicist John Mannon who supports Stan’s story.

The word fallow shows up on the AboveTopSecret.com website in a posting by another alleged physicist (TommyBoy) who supports Stan’s claims.

Then there was the Boo Video (see below). That’s the clip where Stan claimed he filmed an alien peeking in a window.

In one of his more infamous episodes, Stan clearly attempted to discreetly throw objects around a room while implying something paranormal was taking place during a 2014 video interview with Peter Maxwell Slattery. He would later tell Slattery that he intentionally discredited himself because he was instructed to do so during an anonymous phone call else face consequences to himself and loved ones. Basically, he went with the “I made a fool out of myself on purpose or they’d kill me” strategy. Did I mention leading with the chin where angels fear to tread?

An entire book could be written on the discrepancies alone in the Stan Romanek case. In 2009 he claimed a break in occurred at the home of a friend where he was temporarily staying in order to appear at a conference, and that police were called to investigate the situation. Allegations were also leveled that a bomb threat took place at the hotel hosting the event. Local police, however, reportedly confirmed they received no such calls during the time in question, and that no other departments would have responded to the reports. The Romanek saga is absolutely riddled with such inconsistencies. 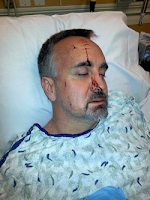 Loveland Police Det. Henry Stucky suspended the case due to a lack of suspect information and leads, concluding the physical evidence at the scene did not support Romanek’s claims. Stucky cited several instances as well as information contained in reports composed by his colleagues as to why he drew his conclusion. The final report clearly suggested detectives were doubtful Romanek was actually assaulted and that they suspected the scene was staged.
The Romaneks reacted to the collective chain of events by upping their ongoing claims Stan was targeted by government agents in order to discredit him and keep the lid on the ET situation. Allegations of harassment and hacked computers were frequent and standard fare, yet no conclusive proof of such claims has been produced to date, much less that illegal material was covertly placed on his computers as claimed.

In what some would describe as a rather typical, convoluted attempt to deflect attention from the lack of actual evidence supporting Romanek’s many fantastic claims, the actions of Loveland Police Det. Brian Koopman were specifically blamed for Stan’s legal woes. Koopman, who was a key figure in the Romanek sexual exploitation of a child investigation, was later charged in an unrelated case with attempting to influence a public official. He was found not guilty.

Romanek supporters continued to allege Koopman set up Stan. The theory is in contradiction to the fact Koopman and fellow officers investigated Romanek due to a tip initially received from Homeland Security, and, basically, the conspiracy narrative that Koopman was out to get Romanek doesn’t make sense. It really wouldn’t matter if it made sense if it was validated, but it’s not, at least not at this point in time. It’s just empty talk, like the entire Romanek saga to a large extent, save the discrepancies and inconsistencies being the only circumstances that can be confirmed.

None of the above means Stan Romanek is necessarily guilty of the charges. Far from it. He is entitled to due process.

What it does mean is, like it or not, ufology – and its community and culture – have been drug into that Colorado courtroom right along with Stan. And maybe they should be.

Should the UFO community not suffer the public relations consequences of celebrating what to more moderate members of society clearly appear to be disturbed individuals? If not the ufology event organizers and consumers, who, exactly, is responsible for putting people at podiums who fail to demonstrate abilities to follow and present rational lines of reasoning?

When vulnerable, non-consensual parties start getting hurt is often the point where authorities take notice of what’s going on within fringe subcultures. No matter how the Romanek trial unfolds, the social issues will be on full display, and their relevance will remain regardless of the verdict. It will be completely apparent to the less indoctrinated that the UFO community, in its current incarnation, offers acceptance and normalcy to people intent on avoiding accountability for their statements and actions while averting from critical thinking.

They also tend to avert from professional mental health services, and the consequences are staring us right in the face. Right there in Loveland. At the least as a reminder, if not a literal example.

There is no doubt we have a percentage of community members who suffer from untreated emotional trauma, a lingering effect of horrific events long since experienced. Those experiences just aren’t likely to have been at the hands of alien perpetrators. How we, as a community, choose to deal with that reality is relevant. It’s also going to trial.

See Relevant Web Links on Romanek Case for a list of significant articles and developments since Romanek’s arrest.

Follow Dana Rieck on Twitter and keep an eye on her employer, the Loveland Reporter-Herald, for coverage of the Stan Romanek trial.

Using Your Own Common Sense in UFO Investigations