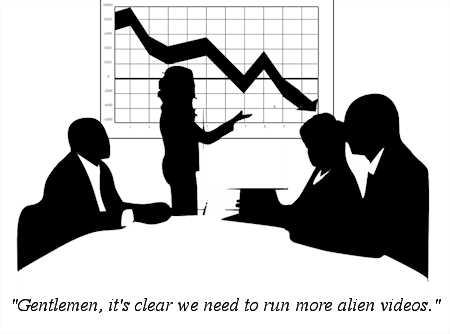 what MUFON’s well-documented report on the Stephenville UFO incident delivered in the summer of 2008. Not to mention how its FOIA requests forced the military to retract its original spin on related events.

MUFON released its Stephenville analysis – complete with the UFO’s dead-on approach toward the no-fly zone around President Bush’s “western White House” in Crawford, Tex., on Jan. 8, 2008– to little fanfare on July 11 of that year. Considering how F-16s had forced down accidental private-pilot intrusions on at least three separate earlier occasions during Bush’s presidency, and also considering how the bogey had no transponder, and that radar pingbacks showed there were no jet fighters anywhere to challenge the target as it bore down on restricted air space, one might think this constituted what we in the news business like to call news. Instead, Romanek’s abduction scenario had sucked all the oxygen out of the room by time the report came out. Why? Well, Romanek supposedly had footage of a space alien.

Pictures are to the media gaggle what Twizzlers are to ants. And that’s what Romanek’s confidante, Denver resident Jeff Peckman, dangled before the press on May 30, 2008 – a single teaser frame lifted off an extended sequence purporting to show a lightbulb-headed space alien doing a peeping-Tom number on Romanek’s bedroom window. Although the footage would eventually go public, the rest was withheld at the time on account of documentary contract negotiations. But it didn’t matter. That single rather cheesy image was enough to swivel all the right heads and, a week or so later, it catapulted Peckman onto David Letterman’s national stage, where he went on to claim Uncle Sam has confirmed 57 species of space aliens have visited Earth. Peckman would continue to draw media attention by lobbying the city council to form an E.T. welcoming committee.

Meanwhile, a few weeks later, back in the Denver suburb of Littleton, MUFON/Stephenville report co-author and radar expert Glen Schulze couldn’t get the press to give him the time of day. “Neither the Denver Post nor the Rocky Mountain News has shown any curiosity about this (Stephenville) story,” Schulze complained at the time, “and I’m in their backyard. There was one article about a guy who wants to form an E.T. welcoming committee …”

This happened so long ago, the Rocky Mountain News has been dead for seven years. The reason “we” choose to rehash this incident is that Denver media is now reporting how “UFO conspiracy theorist Stan Romanek” will soon stand trial on child-porn charges. Although the alien video – also called the “boo tape” – and his claims surrounding it have fallen apart, Romanek has been charging government harassment ever since. On Sunday, Romanek-watcher Jack Brewer issued a blistering takedown of the accused’s sometimes freakish efforts to defend the boo tape, which is well worth reading. And because Romanek was once celebrated in certain circles as The Man With The Proof, Brewer poses a challenge of his own:

“Should the UFO community not suffer the public relations consequences of celebrating what to more moderate members of society clearly appear to be disturbed individuals? If not the ufology event organizers and consumers, who, exactly, is responsible for putting people at podiums who fail to demonstrate abilities to follow and present rational lines of reasoning?

“… No matter how the Romanek trial unfolds, the social issues will be on full display, and their relevance will remain regardless of the verdict. It will be completely apparent … that the UFO community, in its current incarnation, offers acceptance and normalcy to people intent on avoiding accountability for their statements and actions while averting from critical thinking.”

Whether you agree or not, this much is true: those damning Stephenville radar records – the data that so clearly embarrassed the USAF eight years ago – have been relegated to the fringe while the man who enthralled large audiences with an endlessly tangled web is news. Again. So if we’re going to point fingers, let’s not let the media off the hook, either.