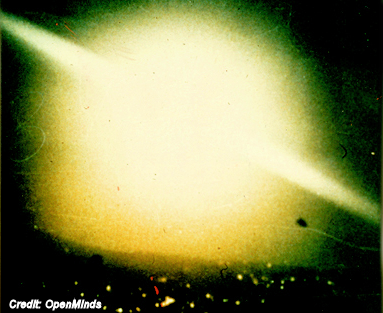 witnesses, and some of these mass sightings paint the best picture showing the mysterious reality of UFOs. One such sighting occurred in 1976 in the Canary Islands, a Spanish archipelago located just off the northwest coast of Africa.

… According to newspaper headlines, thousands of residents of the Canary Islands observed an unidentified luminous phenomenon on the night of June 22, 1976. The event was reported by witnesses on at least three different islands. The Spanish Air Force thoroughly investigated the incident. Although the files associated with this investigation were declassified in 1994, they had already been leaked back in 1976. For whatever reason, the classified air force reports were given to journalist Juan José Benítez in October 1976 by an air force general. Benítez included these in his book, UFOs: Official Documents of the Spanish Government.

Records indicate that the commanding general of the Spanish Air Force’s Canary Islands Air Zone assigned an investigative adjutant to the case on June 25, 1976. Depositions were taken of at least fourteen witnesses. The air force divided these witnesses into four categories, ranking them from most credible to least credible. People found to be mentally challenged, illiterate, or under the influence of drugs or alcohol were put into the very unreliable category, while people like astronomers, pilots, and aeronautical engineers were placed in the most credible category. The sighting reports, like the witnesses, were grouped into four levels to evaluate the quality and quantity of evidence for each.

The witness depositions and a review of the evidence allowed the investigative adjutant to piece together what transpired on June 22, 1976. …

The Canary Islands: Riddles of Light and Stone

A History of Airliner and UFO Encounters – The Uneasy Skies