Tabby’s star shows evidence that there is an alien civilization building a Dyson Sphere around it?

KIC8462852 also known as Tabby star has recently become the primary subject of much ongoing research. The strange fluctuations in this star’s light are what caused Yale astronomer Tabetha (Tabby) Boyajian, who first discovered the star to describe it as the most mysterious star in the universe. 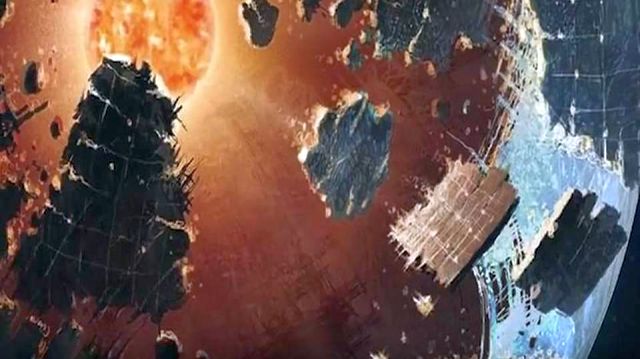 Astronomer Bradley E. Schaefer from Louisiana State University’s findings had suggested a long-term dimming of the Tabby star. A brightness decrease by 20 percent over the last century and that is highly difficult to explain by natural means.

But it is consistent with the idea that aliens were gradually converting the material in the star’s planetary system into giant mega structures.

Schaefer’s study has now been accepted for publication in the peer-reviewed Astrophysical Journal. Schaefer said that independent measures by astronomers show that Tabby’s star has indeed faded. The dips found by Kepler are real. Something seems to be transiting in front of this star, and we still have no idea what it is!

Schaefer took a hard look at this mysterious star not only using the Kepler telescope data, but using a collection of roughly 500,000 sky photographs in the archives of Harvard College Observatory.

Two independent sources now show Tabby Star is displaying unique and inexplicable photometric variations. These findings have scientists scratching their head. Of course none have wanted to say that it is solid evidence of intelligent aliens.

Jason Wright, an astronomer from Penn State University has stated “Aliens should always be the very last hypothesis you consider. But this looked like something you would expect an alien civilization to build.”

We need to consider that perhaps we’ve caught an advanced alien civilization in the process of building something massive near KIC8462852.

Could this be some sort of Dyson Sphere type megastructure built by a highly advanced civilization? How likely is it for 648,000 giant-comets to exist around one star? And to have their orbits orchestrated so as to all pass in front of the star within the last century?

This century-long dimming is a strong argument against the comet hypothesis to explain the Kepler dips. It has been going on for as long as we’ve had telescopes to point at the sky. The comets would have to be the size of a separate solar system to explain it and that is completely implausible, Dr. Schaefer says.

As observed by the Kepler spacecraft, everyone agrees that Tabby Star’s light can appear strongly and weirdly irregular. Anywhere from a fraction-of- a-percent to around 20 percent of the star’s light sometimes is apparently blocked.

That’s why astronomers began talking about alien megastructures, the Dyson spheres. These vast structures are the best explanation for what might be periodically blocking the star’s light.

To investigate this idea, scientists have been using the Allen Telescope Array to search for non-naturalm radio signals from the direction of the mystery star. This effort is looking for both narrow-band signals as well as somewhat broader transmissions that might be produced, for example, by powerful spacecraft.

The world’s top astronomers of the SETI program have refused to rule out the possibility of an extraterrestrial mega structure orbiting the Tabby star. They have stated that they were unable to disapprove the theory that a massive artificial structure is causing the mysterious light patterns spotted around the distant star.