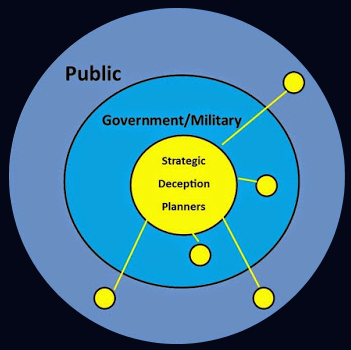 The post is well worth the time to absorb and digest. It contains several relevant points of interest, including key aspects of the career of Col. Carl Goldbranson. The colonel trained extensively in military deception and, according to author and historian Thaddeus Holt, engaged in deception activity during the 1940’s and until the end of his career. Holt documented Goldbranson to be one of the most skilled deception planners in the Allied service in his 2004 book, The Deceivers: Allied Military Deception in the Second World War.

Carrion demonstrates Col. Goldbranson to have been the senior member of the deception-tasked Joint Security Control Special Section at the time he was advising FBI personnel on incidents of flying disks. Carrion explained:

This July 21, 1947 FBI memo is extremely important. It unequivocally documents the connection between US strategic deception planners and early UFO events by relating how Colonel Carl Goldbranson petitioned FBI assistance in investigating UFO events. Goldbranson was a WW2 member of Joint Security Control and one of its principal deception planners.

The Special Section of JSC consisted of only seven individuals including Goldbranson who as a full bird Colonel would have been the senior member. So for those who question the importance of Goldbranson to this analysis, only one question need be answered. What are the odds that the senior member of the principal US organization and specific section charged with planning and implementing U.S. strategic deception is on record in FBI official memorandum, getting his hands dirty in the UFO controversy of 1947? Goldbranson had no reason to be involved unless he was actively promoting a deception plan.

For those unfamiliar with James Carrion’s work, he focuses on the 1946-47 time frame. He cites declassified documents and related materials to present forensic historical analysis. Carrion proposes that a small group of U.S. intelligence personnel masterminded deception operations surrounding reported UFOs for a variety of purposes designed to create military advantages. Learn more in his free book, Anachronism, and keep an eye out for his forthcoming work, The Roswell Deception.