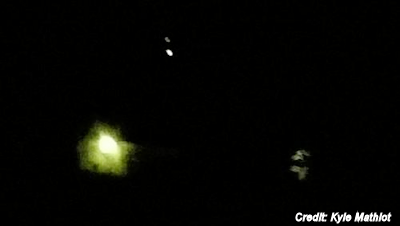 Kyle Mathiot was playing with sparklers with his two young boys and partner Deborah Price in the front yard of their Herberton home on Saturday about 7.30pm when they spotted something strange in the distance.

“I notice one light up in the sky and it was way, way too big to be a star,” Mr Mathiot said.

“I went to get my partner’s phone, and started taking pictures of it and all of a sudden there was another two lights, and it was in the shape of a triangle, with a big light up the front and another two lights up the back.”

Mr Mathiot, 21, took several photos of the aircraft as it hovered in the same place for about half an hour before it disappeared.

“It was zipping around like no plane or drone we’ve ever seen,” he said.

“The lights were about two centimetres apart in the sky.