SETI researchers are buzzing about a strong spike in radio signals that seemed to come from the direction of a sunlike star in the constellation Hercules, known as HD 164595.

The signal conceivably fits the profile for an intentional transmission from an extraterrestrial source – but it could also be a case of earthly radio interference, or a microlensing event in which the star’s gravitational field focused stray signals coming from much farther away. 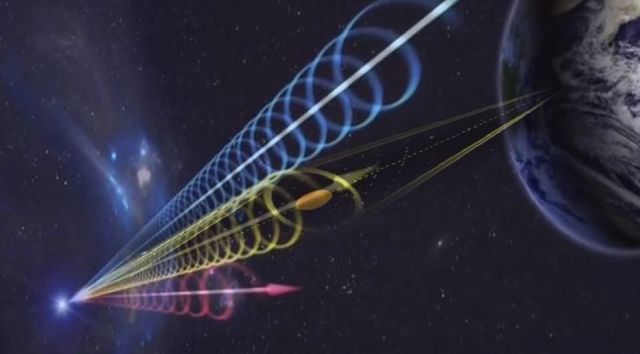 In any case, the blip is interesting enough to merit discussion by those who specialize in the search for extraterrestrial intelligence, or SETI – including Centauri Dreams’ Paul Gilster, who brought the case into the public eye.

Gilster reports that the signal spike was detected more than a year ago, on May 15, 2015, by the RATAN-600 radio telescope in Zelenchukskaya. That facility is in the Russian republic of Karachay-Cherkessia, not far from the Georgian border.

Researchers who are working out the strength of the signal say that if the signal came from an isotropic beacon, it would have been transmitted by a Kardashev Type II civilization.

The Kardashev scale is a method of measuring a civilization’s level of technological advancement, based on the amount of energy a civilization is able to use for communication.

The scale has three designated categories:

A Type II civilization can harness the energy of the entire star (the most popular hypothetic concept being the Dyson sphere—a device which would encompass the entire star and transfer its energy to the planet).

A Type III civilization can control energy on the scale of their entire host galaxy.

At least two SETI research groups are aiming to track HD 164595. The SETI Institute is using the Allen Telescope Array in northern California, while METI International is looking to the Boquete Optical SETI Observatory in Panama.