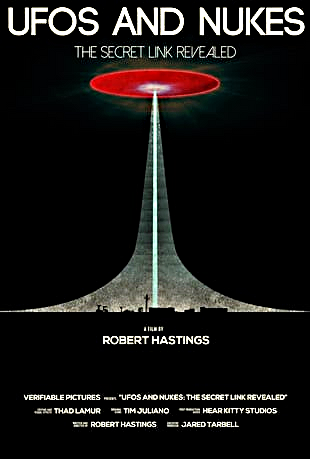 The documentary makes an attempt to establish the notion that UFOs have not only overflown our nuclear weapons sites, but have made numerous attempts to disrupt the operational status of our nation’s ICBM forces. On some occasions, UFOs are allegedly to have actually caused Minuteman ICBM missiles to drop off strategic alert. Hastings offers the viewers what he believes to be compelling evidence that supports his premise.

The film is 48 minutes long. The overall quality of the production is good when it is compared to past attempts at depicting the UFO subject in documentary form. I use the following as an example of very poor quality: New Discovery Channel UFO Program’s Segment on Robert Salas and Oscar Flight. I believe that Hastings’ production crew out performed Discovery Channel on this one.

The quality of the film’s sound is good. The narration is clear and understandable. The same can be said of the witness presentations for clarity of content. The sound from the archival footage is also easy to hear and comprehend with no noise distortion noted.

The graphics are clear and easy to read. I had issue with the use of supporting documents fading in and out with a change in background color. This is a personal opinion as others who view the film may not see this as a distraction.

Hastings is to be commended for his selection and use of archive photos/film depicting Strategic Air Command (SAC) missile operations and it’s missile crews as well as that of the bomber force. I like the visual of the old crew whites with the squadron patches on the right side of the uniform shirt above the pocket. The use of the Launch Control Facility and Launch Facility at the Ronald Reagan Minuteman Missile Historical Site was a great idea. This provides a realistic setting for Hastings theme and puts everything in proper context related to the weapon system. …

Robert Hastings Questions The Silence From The “Debunkers/Skeptics”

My UFOs and Nukes Documentary: The Debunkers Remain Oddly Silent

Did It Really Happen?