Well-known conspiracy theorist David Icke has clashed with TODAY Show hosts Karl Stefanovic and Lisa Wilkinson over the origins of the moon and the existence of aliens.

David Icke, in Australia for a series of talks as part of his ‘World Wide Wake Up Tour’, claims the September 11 attacks were an inside job and says aliens secretly live amongst us in “human form”. 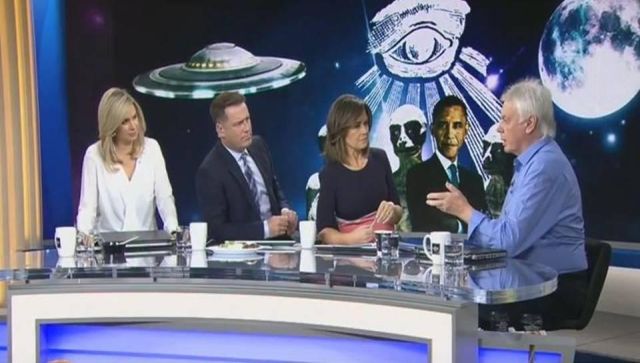 “What’s the go with aliens then can you give us an indication of what’s happening?” co-host Karl Stefanovic asked.

There is a common theme of a force that has been manipulating human society, and they call them all over the world different names, but when you do the research, and I’ve been researching this for 26 years, not 26 seconds, you find that these different names are referring to the same force, Mr. Icke said.

Wilkinson then asked about his beliefs regarding the origin of the moon.

“You, for example, think the moon, our moon, is a hollowed-out space station?” Wilkinson asked.

“This was first suggested by Soviet scientists, who produced a detailed breakdown of how the moon cannot be natural, and everything that led them to believe the moon is hollow,” Mr Icke replied.

“Mainstream science cannot explain why a body that big, bigger than Pluto, can be going around a planet this small”.

Stefanovic then accused Mr Icke of being “very defensive” about his theories.

“No, I get exasperated,” Mr Icke replied.

“I get exasperated because the mainstream media and most of human society looks at the world down the wrong end of a telescope.”

“No I love these theories,” Stefanovic countered, adding “but I’m not slogging people $100 to listen to my rubbish.”