On September 18, 2016 Frankie Lucena of Cabo Rojo, Puerto Rico, photographed an enormous sprite over the Caribbean Sea. For a split-second, the sky was illuminated by a mushroom-shaped flash:Oscar van der Velde, a member of the Lightning Research Group at the Universitat Politècnica de Catalunya, explains what Lucena photographed: 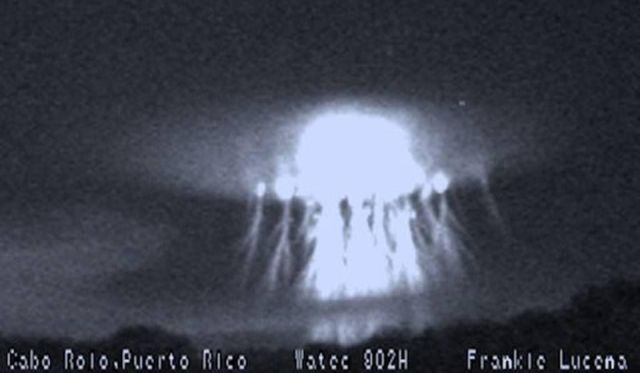 “This type of sprite is often called ‘jellyfish’ or ‘A-bomb,’ and ranks as the largest type of sprite in both horizontal and vertical dimensions,” he says. “It consists of a bright halo approximately 85 km above Earth’s surface surrounding sprite elements with long tendrils reaching down as low as 30 km above ground level.”

“This kind of sprite tends to be triggered by a very impulsive positive cloud-to-ground flash,” van der Velde said to spaceweather.

The curious thing is, Lucena did not observe an instigating lightning bolt. Instead, just before the sprite appeared, he recorded a bright point-like flash of light. “Was it a cosmic ray hitting the camera?” wonders Lucena. Another possibility: The point-like flash could have been a cloud-to-ground strike mostly eclipsed by intervening clouds.

If Lucena did photograph something new triggering a sprite, perhaps it shouldn’t come as a big surprise. The field is relatively new. Although sprites have been seen for at least a century, most scientists did not believe they existed until after 1989 when sprites were photographed by cameras onboard the space shuttle. There is still much to learn.

Play the video to see the flash.